A Creationist Zoo in the UK August 31, 2009 Guest Contributor

A Creationist Zoo in the UK

We know what the Creation Museum in Kentucky is like… but what about Noah’s Ark Zoo Farm in the UK?

… the zoo’s owner Anthony Bush seems in no doubt that there is a moral, didactic purpose to the enterprise. “From the outside, our farm is not overtly Christian,” he once told the Church Times. “But, from the inside, we are very strongly Christian. I am a Creationist, and we see the farm as a mission station to give people scientific permission to believe in God.”

So what’s inside the zoo? Paul Sims of New Humanist visited and took some pictures: 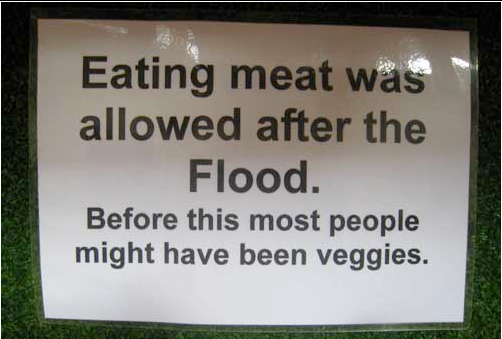 First of all, the statement is completely inaccurate. (So inaccurate, in fact, that the Creation Museum felt the need to depict it themselves. They used a dinosaur eating a pineapple.)

Secondly… did he just call my ancestors vegetables?

And what about this bit of scientific brilliance? 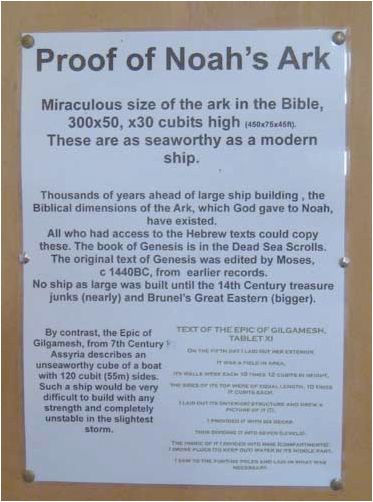 So the proof of Noah’s Ark is that it was supposedly very large, according to the Bible? That “the Biblical dimensions of the Ark… have existed”? What does that even mean?!

(Someone should use that as a pick-up line: “Hey baby, I’m 9.5 inches down there. You want me to prove it? Well, that measurement exists. So there.”)

Despite these posters, Sims says the Creationism isn’t always in plain view at the zoo as it is at the Creation Museum. But some areas leave no doubt about it:

More outlandish “scientific facts” were waiting for me at the gibbon enclosure. The sign introducing the gibbons was uncontroversial, but around the side of the enclosure was a giant poster explaining “30 reasons why apes are not related to man”, which argued that biological differences, such as apes’ possession of 24 pairs of chromosomes to humans’ 23, “prove” that there is no relationship between the species.

I suggest PZ lead a trip to the UK next summer. Who’s in?

August 31, 2009 Help My Friend Win This Contest?
Browse Our Archives
What Are Your Thoughts?leave a comment