Young Atheists Are Coming Out of the Closet August 18, 2009 Guest Contributor

Young Atheists Are Coming Out of the Closet

There’s a great article about how young people are coming out as atheists. It’s by Kate Shellnutt and appears in the online magazine Shift.

I’m mentioned in the piece and it’s one of the rare times where the details about me are actually accurate. You’d be surprised how often that doesn’t happen…

Our friend Ron Gold is also mentioned, as is Dave Silverman:

“The problem with atheism is that many atheists thought they were alone, but with the Internet, they’ve become connected with millions like them,” said David Silverman, spokesman for the American Atheists, a civil rights group based in Cranford, N.J., which offers scholarships to atheist activists in high school and college.

As more college campuses provide opportunities for students to get involved in groups of nonbelievers, it’s becoming easier for younger people to identify as atheists.

Now is definitely a better time to be a college atheist than ever before.

And while the Secular Student Alliance had 150 affiliates this past year, we’re growing fast: 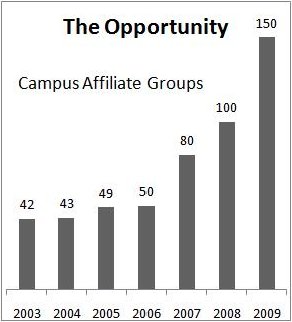 August 18, 2009 Starting a Camp Quest in Texas
Browse Our Archives
What Are Your Thoughts?leave a comment