Almost four years ago, these cartoons of Muhammad appeared in the Danish newspaper Jyllands-Posten and created an uproar: 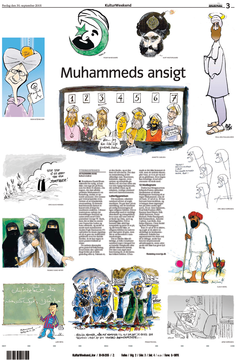 Many fundamentalist Muslims took to violence because of the depictions, which they felt were forbidden according to the Koran. (Though there’s more to that explanation.)

Of course, their religious beliefs have no bearing on how the rest of us use our right to free speech. We don’t have to respect or abide by their silly rules. But due to fear, most major publications refused to publish the images.

A book about the controversy is set to be published later this year. It’s called The Cartoons That Shook the World by Jytte Klausen. It’s published by Yale University Press.

The publishers refuse to include the images in the book.

… [Klausen] was disturbed by the withdrawal of the other representations of Muhammad. All of those images are widely available, Ms. Klausen said by telephone, adding that “Muslim friends, leaders and activists thought that the incident was misunderstood, so the cartoons needed to be reprinted so we could have a discussion about it.”…

John Donatich, the director of Yale University Press, said by telephone that the decision was difficult, but the recommendation to withdraw the images, including the historical ones of Muhammad, was “overwhelming and unanimous.” The cartoons are freely available on the Internet and can be accurately described in words, Mr. Donatich said, so reprinting them could be interpreted easily as gratuitous.

Or maybe they’re just scared Muslims will kill them.

I would hope an academic press, of all publishers, would want to promote the idea of free speech, including speech that may offend some people. To not include images that are the very subject of the book is, as Reza Aslan says in the New York Times article, idiotic.