Derek Rodgers Saved By His Noodliness

You may have already heard that atheist Derek Rodgers was expelled from the Creation Museum after wearing a shirt reading the bus campaign slogan, “There’s probably no god. Now stop worrying and enjoy your life.”

The words “No God” were large, front and center.

Derek was told by museum staff to turn his shirt inside-out, and he did. Later, he was telling some friends in the museum gift shop that he wouldn’t buy anything because he didn’t want to give the museum any more money.

A family overheard this and complained to museum staff, saying that Derek “ruined their vacation.” (That’s funny. Seeing the exhibits in the museum ruined mine.)

Mark Looy (below, background) confronted Derek and told him to leave:

Looy also kicked out a documentary film-maker who captured all this on tape.

Looy’s actions were unwarranted but I suppose he needed to save face. 300+ atheists were there and not a single incident?! That would be horrible for PR! Perhaps Derek was just a scapegoat for the museum.

In any case, they made another mistake.

Looy confronted Derek in front of a green background. And as anyone who watches The Colbert Report knows, you don’t do that unless you want someone to change the background.

Which reader Chuck did: 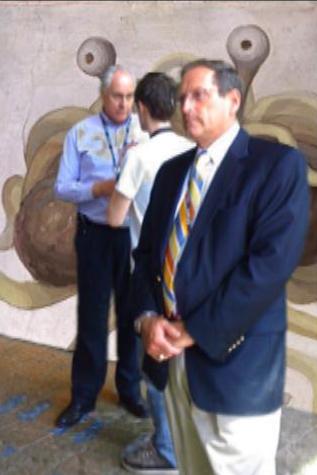 So that’s why Derek came out of this situation looking so good. He had His Holy Noodliness looking over him!

August 13, 2009 Humpty Dumpty Religious Liberals
Browse Our Archives
What Are Your Thoughts?leave a comment