Trust the Word of Jesse

In part of our trip to the Creation “Museum” we saw a presentation called The Ultimate Proof of Creationism or some such.  To our collective lack of surprise, it was nothing of the sort.

In the presentation – and a consistent theme in the museum – was the notion that everyone is looking at the same facts, but we come to the table with different presuppositions.  We secularists have an inaccurate view, the museum argued, because we start with the assumption that 1) our observations are generally accurate and 2) that the past is an indication of the future.  We can’t prove these, so they’re unfounded and arbitrary!

Of course… these are SHARED assumptions among creationists as well, but they add another axiom.  Biblical literalists assume that the Bible is the true word of god.  And that assumption is supported because… wait for it… it says so in the Bible!  Yes, that’s right, they’re pointing to circular reasoning as a superior starting point. 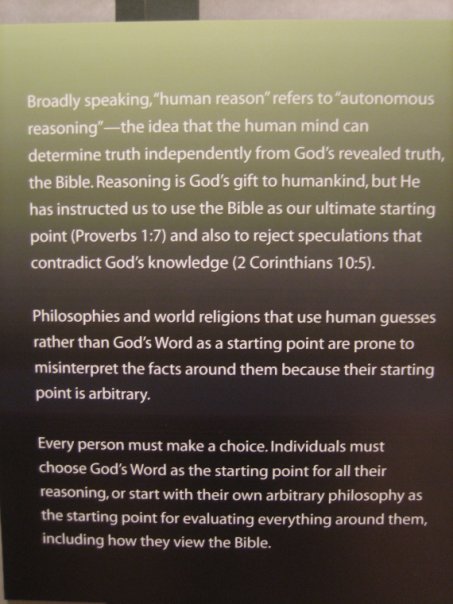 How absurd. But at least the system has no inconsistencies!  It’s internally supported (read: circular).

Here’s a thought experiment: I have another “starting point” through which I’ll interpret my evidence.  Instead of trusting fidelity to the Bible as the ultimate judge of truth, we should just trust whatever I say! Let’s assume that everything I say from now on is true. How do I know it’s true?  Because I just said so.  And remember, we’re starting with the assumption that I’m right.  By the way, I say that I’m perfect.

The Word of Jesse also asserts that you’re all excellent, amazing people.  Doesn’t it feel good to have this worldview?

August 12, 2009
What Did Christians See When They Joined the Atheists at the Creation Museum?
Next Post

August 12, 2009 APA Says Gay-to-Straight Therapies Do Not Work
Browse Our Archives
What Are Your Thoughts?leave a comment