A Survey of the Non-Religious August 6, 2009 Guest Contributor

A Survey of the Non-Religious

Luke Galen, an associate professor at Grand Valley State University in Michigan, recently conducted a survey in conjunction with the Center for Inquiry of non-religious people specifically.

That hasn’t happened in much depth before.

You can check out the methodology and results here (PDF). The biggest flaw, as far as I can tell, is that only people on CFI’s mailing list were polled.

That’s a big problem, but it’s tough to get a sampling of atheists without seeking them out specifically.

That said, what does the survey tell us?

This new survey reports that confident nonbelievers are more emotionally healthy with respect to “fence sitters” or religious doubters, shows that “spirituals” report less satisfaction with their lives than those who identify with other self-labels, and suggests that the common assumption that greater religiosity relates to greater happiness and life satisfaction is not quite true.

That’s all well and good, but the part that captured my attention was this graphic: 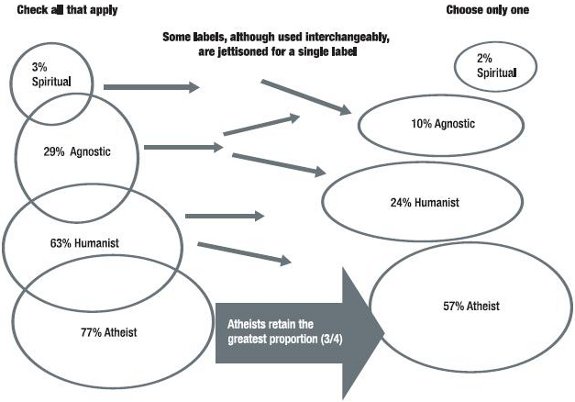 What does that show us?

When given an option to describe themselves using as many labels as they wanted, the top four categories (on the left) were Atheist, Humanist, Agnostic, and Spiritual.

But when asked to select the one best descriptive label (on the right), we see the numbers change quite a bit.

Approximately 75% of people who were comfortable using the term “atheist” felt that that was the best term to describe them.

Only about 38% of self-described Humanists felt that was the best term to describe themselves.

There was also this table to organize some findings: 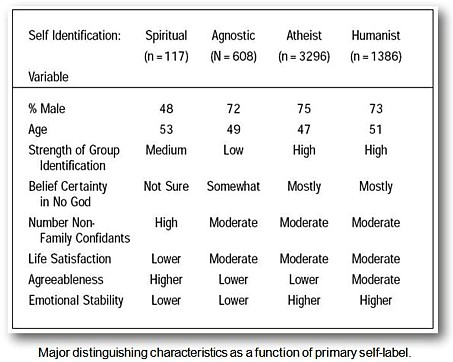 You can read what Galen feels are the implications of these findings here (PDF). But before you do that, what do you think these results tell us?

How can we use this information to our advantage?