This past May and June, 25 buses in Chicago ran the following ad, courtesy of the Indiana Atheist Bus Campaign:

It didn’t receive the level of publicity we’ve seen with other atheist bus ads, but still, it was nice to get the message out there.

Now, the New Life Covenant Oakwood Church is countering with its own ad, which looks something like this: 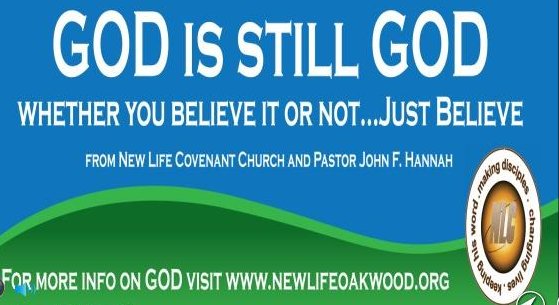 God is still God whether you believe it or not… Just believe.”

Essentially, they ran Pascal’s Wager as a bus ad, a “wager” that has been proven time and time again to be incredibly illogical and just plain absurd.

I could’ve written this:

Xenu is still Xenu whether you believe it or not… Just believe.”

And that would’ve had as much intellectual heft as the church’s ad.

But at least I’m not wasting $5,000 to make a point that anyone with a brain could dissect and prove pointless in a matter of seconds.

“We wanted to represent our city and the Christian community,” said [pastor John] Hannah, noting that the atheist group wasn’t from Chicago. “I felt like the atheists, to come in and say there probably isn’t a God, that’s an attack against our faith. We wanted to be loud just as they were loud.”

Hannah hopes other churches will pay for similar ads.

I would imagine the Chicago Transit Authority hopes for the same thing. So do I. Look what those atheists have started…

To the pastor: the atheists weren’t attacking your faith in particular. We were going after faith in general and the ridiculous way of thinking that it propagates, the same type of irrational thinking displayed in your ad.

I should point out that the pastor is right that the atheist group wasn’t from Chicago.

But a Chicago group is forming and will be putting up another atheist ad in the city, if all goes well. And this one will be far more visible than the one on the buses 🙂

August 3, 2009
How to Pray to the Flying Spaghetti Monster
Next Post

August 3, 2009 Which College Majors Make You Less Religious?
Browse Our Archives
What Are Your Thoughts?leave a comment