They Rejected an Atheist Ad for Being “Offensive”… But They Allow This? August 1, 2009 Guest Contributor

They Rejected an Atheist Ad for Being “Offensive”… But They Allow This?

Here’s what the general manager of the company said at the time:

“It was offensive to me,” said Tom Traylor, general manager of Lamar Advertising in Birmingham. “We have the autonomy to decide what’s in the best interests of our company and what’s offensive. I don’t think it was the kind of message we wanted to stand behind.

“You have to know what area of the country you’re in,” he said. “A heavy percent of our population is Christian. That’s who we cater to.”

You would think Lamar Advertising in Texas would feel the same way, considering they also cater to a heavily Christian population.

In which case, those Christians must love getting it on with “premium” escorts… because Lamar just approved this billboard: 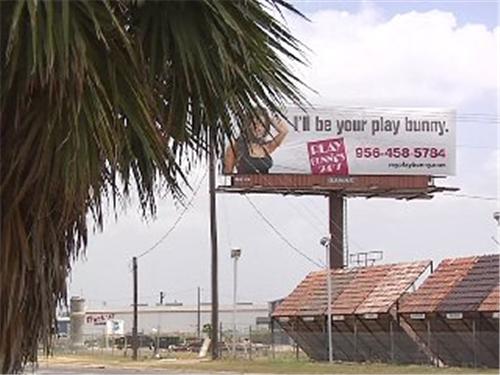 (via BNET — Thanks to Brian for the link!)

August 1, 2009
Looking for Volunteers to Help with Creation Museum Audio Tour
Next Post