Brad Pitt Is an Atheist! Kind of…

Looks like semi-atheist Angelina Jolie finally put her feminine wiles to some good use.

Brad Pitt recently made the following comments about religion to BILD (a German newspaper):

BILD: Do you believe in God?
Brad Pitt (smiling): “No, no, no!”
BILD: Is your soul spiritual?
Brad Pitt: “No, no, no! I’m probably 20 per cent atheist and 80 per cent agnostic. I don’t think anyone really knows. You’ll either find out or not when you get there, until then there’s no point thinking about it

According to Richard Dawkins‘ spectrum in The God Delusion, where 1 represents 100% belief that God exists and 7 represents 100% certainty God doesn’t exist, Brad Pitt’s atheism would presumably be at a 6 (where Dawkins is) and his agnosticism would be at a 4 (right in the middle).

Let’s do some math…

I have Brad Pitt pegged at a 4.4 on the spectrum.

He’s not quite in our camp… but we’ll take him! 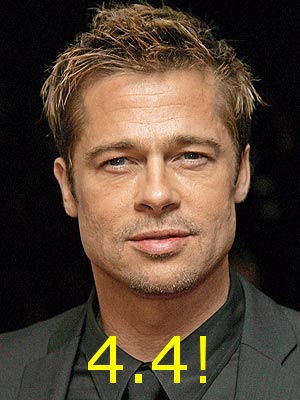 (Thanks to everyone for the link!)

July 23, 2009
Why is the Discovery Channel Promoting the Creation Museum?
Next Post

July 24, 2009 Christian Company Receives Brilliant Smackdown from a Polite Atheist
Browse Our Archives
What Are Your Thoughts?leave a comment