Billboards Fight Against The Separation of Church & State “Lie”

The Community Issues Council, a Christian group opposed to the separation of Church and State, has gotten into the billboard business. They’ll soon have 10 up across Florida, including this one below: 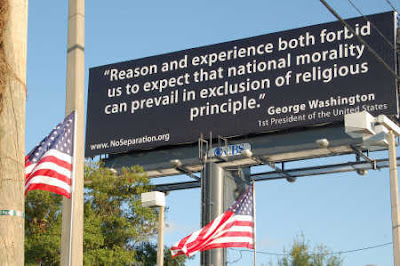 There are a couple of problems with these billboards. Not only will it be tough to comprehend a long, complicated sentence when speeding down the highway, but also, some of them will have fictitious quotes. Even the group’s local chapter president, Terry Kemple, admits to this:

The billboards showcase quotes from early American leaders like John Adams, James Madison and Benjamin Franklin. Most of the quotes portray a national need for Christian governance.

Others carry the same message but with fictional attribution, as with one billboard citing George Washington for the quote, “It is impossible to rightly govern the world without God and the Bible.”

“I don’t believe there’s a document in Washington’s handwriting that has those words in that specific form,” Kemple said. “However, if you look at Washington’s quotes, including his farewell address, about the place of religion in the political sphere, there’s no question he could have said those exact words.”

Whether the quotes are made up or not don’t seem to matter to Kemple and billboard financier Gregg Smith, since, as they assert, they are doing God’s work:

More recently, Christian separation critics have scoffed at President Barack Obama’s assertion in April that Americans “do not consider ourselves a Christian nation or a Jewish nation or a Muslim nation.”

At the time, Kemple and Smith were beginning to plan for the billboards.

“I don’t think it’s coincidental,” Kemple said. “I think God had his hand in it.”

More information about the billboard campaign can be found on the propaganda site www.NoSeparation.org.

July 21, 2009
How Have Science Communicators Helped You?
Next Post