Jesus at the Soccer Game

I thought it was overtly religious when college football quarterback Tim Tebow wore black strips under his eyes with religious phrasing during the BCS championship game:

Check out what Brazilian soccer players Kaka (below) and Lucio did during the Confederations Cup last month: 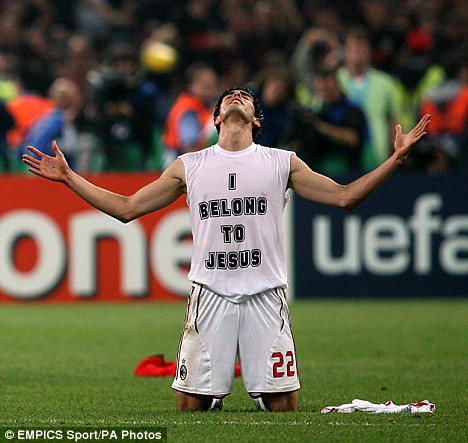 You may be asking: If a Brazilian people do it, can it be wrong? (Ha!)

FIFA, the soccer governing body, has reminded the players they are not allowed to make “displays of a personal, religious or political nature” while playing.

A warning letter was sent to the Brazilian football federation ‘to remind them of the relevant regulations, so that such incidents do not recur in the future’.

Brazilian players, and Kaka in particular, are well-known for their strong religious beliefs and the squad and backroom staff formed a large circle and sank to their knees in prayer after the victory over the US at the end of last month.

This will all continue until some player wears a shirt with an atheistic slogan (“I am a Soccer-ular Humanist”?)… You know this would all come to an end immediately if that happened.

July 13, 2009 Pharmacists Must Dispense Plan B
Browse Our Archives
What Are Your Thoughts?leave a comment