A Review of Your Religion is False by Joel Grus July 12, 2009 Guest Contributor

A Review of Your Religion is False by Joel Grus

A few months ago, I posted a video of a talk by Joel Grus. That talk has now turned into a book: 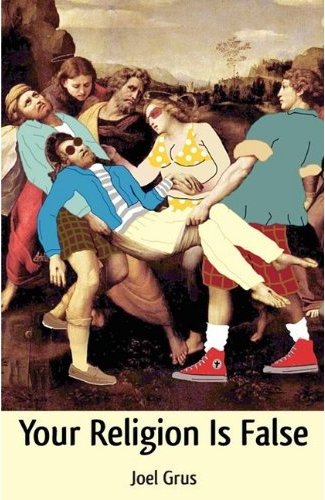 It doesn’t matter what you believe, Grus thinks your religion is false.

To all those people who think the New Atheists focus too narrowly on Christianity, Grus counters that argument and blows it out of the water. He’s not making over-your-head philosophical arguments… he’s just pointing out the problems with each and every faith he can find.

What religions are deemed false? All the major ones, of course, and then some:

Wait, what? Why is that last one included in the list?

Part of me suspects that Pastafarianism is not a serious religion but was designed primarily to mock some of the more prominent religions. On the other hand, this suspicion is rooted primarily in the ridiculousness of the notion of a Flying Spaghetti Monster. Using this sort of ridiculousness as a criterion I could just as easily mount the same suspicion against any of the other religions in this book. As I have first-hand experience that those other ridiculous religions are practiced in earnest, I am forced to assume that the same is true of Pastafarianism, and I am forced to point out that Pastafarianism is (like every other kind of food-worship) false.

So how do you write a book like this, with 91 short chapters, without pointing out the same things over and over?

The answer to that is why I like the book so much. Grus not only explains why each religion is false, he explains each religion’s basic beliefs. That’s actually a far better use of this book for me, as a sort of religious encyclopedia. It’s nothing you can’t find on Wikipedia, but it’s less objective and far more entertaining. I doubt Grus’ arguments against faith will change many minds, but it will educate you on the finer points of religions you don’t tend to hear much about.

I read the chapter on Jainism (the religion in which I grew up) especially carefully and it was surprisingly accurate (and with some depth!). I don’t see that very often.

It’s also not a direct assault on any one particular faith, which makes the book more palatable for anyone who is religious.

Except for Muslims. They might not want to read the hilarious chapter on Islam, which ends the following way:

Nonetheless, there is no excuse for terrorism; the veil liberates no one; pork is exceptionally tasty; rent-to-own is a huge rip-off; praying five times a day is a huge waste of time; and there is no god Allah. Islam is false.