An Atheist License Plate Story with a Happy Ending

After reading Jason‘s story, this one makes me feel a little more optimistic.

Doug moved to Louisiana earlier this year and registered his car in his new home state.

The Department of Motor Vehicles website explains how anyone can get a personalized license plate — you can even type in what you want and they’ll let you know if it’s “unacceptable or unavailable.”

If you type in things like: JESUS, CHRIST, GOD, 4GOD, 4JESUS, JESUS4U, GO2GOD, LOVEGOD, or ALL4GOD, you will find out all of those are unavailable (presumably already taken and on the road).

If you type in FUCKYOU, you’ll see it’s unacceptable.

Doug decided to type in GODLESS. He saw that it was available. He happily filled out the application. Shortly after that, Then he got an email response that began:

Your plate request cannot be approved…

This made the secular hairs on the back of my neck stand up. Was this not blatant bias on the side of religion by the government-run Department of Motor Vehicles of Louisiana, and therefore a violation of the Establishment Clause in the First Amendment and the Louisiana Constitution?

So Doug wrote back explaining that he was a director of the New Orleans Secular Humanist Association (NOSHA). He felt the plate was an ideal one for him. Certainly, it wasn’t offensive to anyone else; it was just describing who he was.

That was all it took.

He received another email from the DMV:

Your request for the prestige plate, “GODLESS,” has been reconsidered and will be approved.

Wow. That was quick and painless. Now, why was it “rejected” in the first place? I don’t know. But a quick, polite response from Doug must have changed the DMV’s mind.

Doug paid the money. He waited the requisite several weeks. And finally: 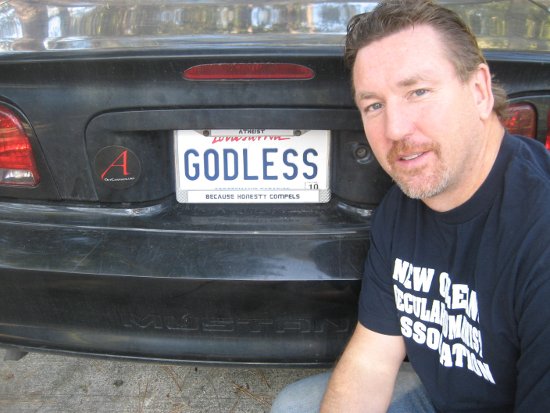 By the way, if you request the license plate NO GOD, it’s listed as available 🙂 As is IH8GOD for those of you who enjoy provoking road rage (I don’t approve). For that matter, so is GODDAMN. I’m surprised about that one…

I’d like to throw down the gauntlet to my fellow freethinkers and ask them to apply for similar theistically un-flattering license plates. You don’t have to buy them; just push the edges of the DMV’s religious tolerance envelope.

Have any of the rest of you with pro-atheist plates ever had trouble getting them approved?