Why is Comcast Referring to Ben Stein as the “Smartest”? June 22, 2009 Guest Contributor

Why is Comcast Referring to Ben Stein as the “Smartest”?

As a Comcast customer only because I have no other choice in my area, I’m used to their shitty customer service.

But when you see the following, it’s clear they’re not even trying to improve…

Here’s a promo for “Comcast Digital Cable with On Demand and HBO.”

The headline: The Best and the Smartest.

The picture to go along with that: Shaquille O’Neal and Ben Stein. 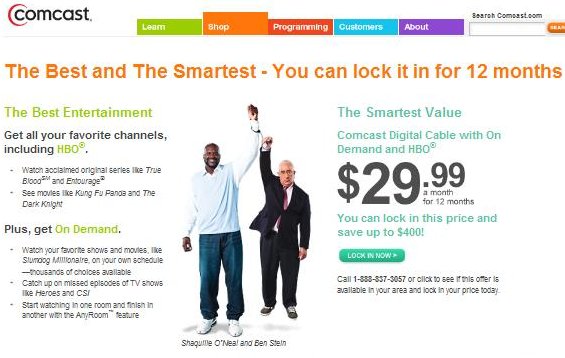 No one’s ever accused Shaq of being the smartest man around… so I presume they mean he’s the “Best.” Even that’s arguable since he didn’t win the NBA championship this past year…

Stein, the evolution-denier, the man behind the pro-Intelligent-Design movie Expelled, the man who once said “science leads you to killing people“…. he’s the “smartest”!?

Which uneducated intern made that marketing decision?

Maybe I shouldn’t be surprised Stein is representing Comcast. When given several options, Stein tends to support the worst one in the bunch.