A Brief Review of Why Evolution Is True by Jerry Coyne June 15, 2009 Guest Contributor

A Brief Review of Why Evolution Is True by Jerry Coyne

When I heard of Jerry Coyne‘s book Why Evolution Is True, I had to pick it up. Then it sat on my shelf while I failed some students. Now, I’m done with it. 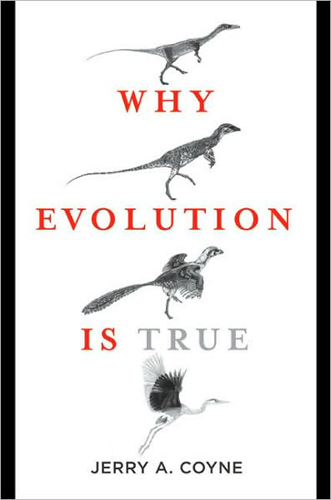 It’s a good, thorough analysis of the evidence behind evolution. Easy to read and easy to understand, for sure.

Is it as good as Richard Dawkins‘ The Ancestor’s Tale? No. Dawkins’ gift is that he can be humorous, personable, and educational at the same time. Coyne’s book is much more dry and detached. Still, I was pleasantly overwhelmed with the information.

Often, Coyne makes an argument that something make complete sense in the eyes of evolution, but it doesn’t hold up under Creationism:

Now try to think of a theory that explains the patterns we’ve discussed by invoking the special creation of species on oceanic islands and continents. Why would a creator happen to leave amphibians, mammals, fish, and reptiles off oceanic islands, but not continental ones?… There are no good answers — unless, of course, you presume that the goal of a creator was to make species look as though they evolved on islands…

While I understand the need to point out how absurd Creationist beliefs are, it’s just unnecessary here. I imagine Creationists who accept the locations of the species would just say God wanted it that way. With this much information, pandering to Creationist readers is unnecessary. If they’re not swayed by the mountains of evidence, trying to explain why God wouldn’t act this way seems useless.

Still, for the person interested in Biology who wants a crash course in evolution, this is a great start. You get a decent overview of the fossil record, sexual selection, examples of poor design, speciation, etc.

If you don’t finish the book wanting to learn more about evolution, you didn’t read it correctly.

June 15, 2009 Dwight Howard, God Lose NBA Finals
Browse Our Archives
What Are Your Thoughts?leave a comment