What’s wrong with superstition? Sometimes, it can make gullible people believe that something other than themselves controls their lives. But in the worst of scenarios, it can kill.

We’ve already seen religious superstition do that in the case of Madeline Neumann when her parents denied her the medicine she needed because they felt God would take care of it. Madeline died at the age of 11.

It’s even more brutal in places like Kenya, where superstitious beliefs have led to the worst of crimes: in one case, burning people alive because they were accused of witchcraft.

I tend to wonder how anyone could believe such nonsense… but when you lack any critical thinking skills, it’s easy to buy into the rumors and lies that people spread.

Henrik Thomé has created a powerful 30-minute film exploring the power of superstition in India.

Thomé is led by Babu Gogineni, director of the International Humanist and Ethical Union, to a village where a woman was murdered for — take a guess — being accused of witchcraft. Her family explains what happened: 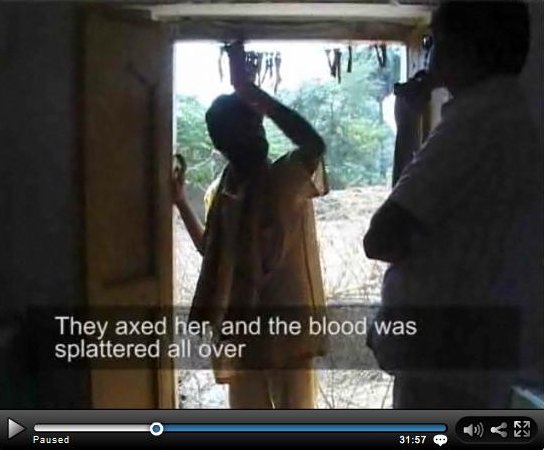 As it turns out, the murdered woman is also a member of the (unofficially) lowest caste — the dalits (a.k.a. the “untouchables”). Dalits are often the victims of such crimes.

The video also features an anti-superstition activist. He performs some magic tricks (with explanations) in front of children to try and break them of their belief that something unnatural is taking place. Later on, another similar activist puts a man on a bed of nails and “walks on fire” — again, to show these are not acts of the devil, simply illusions that anyone can do. I sympathize with their efforts. I’m not sure how many people they are reaching, but they are to be applauded for their efforts.

You *must* watch this video: