NASCAR and the Creation Museum

***Update***: Richard Wade wins the prize for greatest comment in this thread:

The Creation Museum NASCAR team thinks the Meijer 300 race is only 3 miles long.

It’s stereotypical I suppose… but the match doesn’t surprise me at all.

The Creation Museum will be sponsoring a car driven by Bobby Hamilton Jr. in this weekend’s Meijer 300 race at the Kentucky Speedway.

“When Randy MacDonald approached us with the idea of participating in the race this weekend, we were delighted to be included. Racing is very popular here in Kentucky, and this is a great opportunity for the Creation Museum to be brought to the attention of a new audience at an incredible venue just an hour from us,” said museum founder Ken Ham. “We are proud to be a part of the MacDonald Motorsports team for this weekend and will be cheering them on to victory.”

“As we were planning for the Meijer 300 at the Kentucky Speedway, we looked around for local businesses and organizations that would mesh with our team’s values and audience, and we felt the Creation Museum fit that criteria,” said team owner Randy MacDonald. 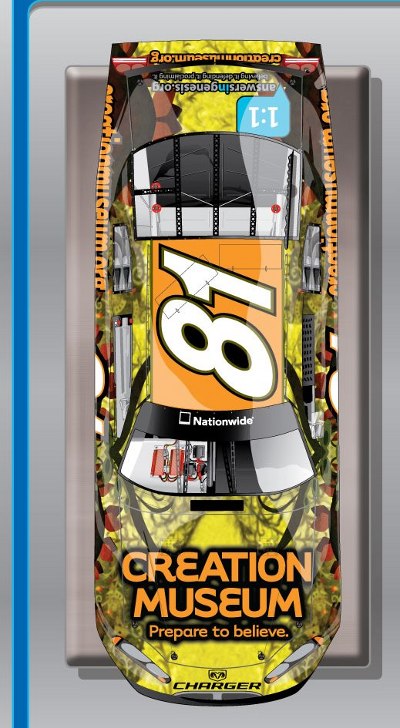 Question: Which sponsor’s car would you rather see win the race?

Seriously, I know nothing about NASCAR except the stereotypes. But this story just confirms everything I thought. Is MacDonald Motorsports that desperate for a sponsor that they’d promote a lie? Is every person on that team a Creationist? Where’s the car sponsored by the psychics? Maybe the British Chiropractic Association wants in on this.

(Thanks to Todd for the link!)