How Big is Religion’s Impact on Moral Judgment?

Is religion the primary source of people’s moral judgments?

It looks like a nation’s culture plays a larger role than religion itself.  ‘David Hume‘ had an interesting post on SecularRight.org last week examining data from the World Values Survey on abortion opinions between religions and  between religions within a country:

It turns out that there’s huge variability between nations’ views on abortion, and it’s a better predictor than religion.  To put it another way:  If religion were the primary source of moral judgments, the best way to guess an individual’s views on abortion would be to know that person’s religion.  But country is more closely tied – it’s more helpful to know what country the person is from than his religion.

He doesn’t include the trendline’s equation in his blog post, but he was helpful enough to include the raw data, which I used to create my own scatterplot: 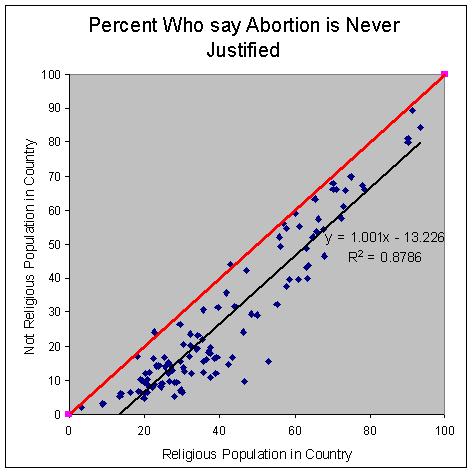 Here’s an explanation of what you’re looking at:

On average, those who identify as religious in a country are 13.2% more likely than the non-religious to say that abortion is never acceptable.

What should we take away from this?  Well, as always, correlation is not the same as causation. Religious individuals are more likely to interact with their community, which could shape their opinions.  People opposed to abortion could be more likely to seek out religious groups.

I suspect that these are true, but it also seems likely that religion does influence opinion.  If you believe that a god spoke out against homosexuality, you’ll be more likely to oppose gay relationships.

… It’s just not the biggest influence.  Secular society has a culture of its own, one with a huge impact on views.  I’d bet it even influences how people interpret their scripture.  People might claim to derive moral values from a holy book, but it looks much more as if they get their views largely from society and then skew them a bit based on their book.

What do you get from the data?

June 8, 2009
A Suggestion for Atheists Who Want to Come Out to Their Christian Partners
Next Post