How much money do you give away?

I am a due-paying member of several atheist (or atheist-friendly) groups. And in the case of a couple that mean a lot to me (the Secular Student Alliance and the Secular Coalition for America), I give more than that.

But I’ll admit I don’t give very much to other causes — important causes — like poverty, the environment, child welfare, animal rights, etc… Maybe because I think the issues are too big for any of my donations to matter.

One thing I’ve felt churches do amazingly well is providing a means for people to give money to deal with the “Big Issues.” Yes, you give (or are guilt-tripped into giving) your tithes to pay staff and build the church and send people on mission trips… but besides that, Christians seem to feel that donating their money is a natural thing to do. Giving is a habit for them. It doesn’t matter what their personal finances are like — they always seem to give away a certain percentage of their income. Not only that, they lead the way when it comes to doing good works. One recent example: putting shoes on the feet of children who don’t have any.

Why aren’t atheists doing things like that? Why aren’t we giving away as much of our money as Christians do? Bill Gates and Warren Buffett-types notwithstanding, can’t we do better at this on the whole?

Dale McGowan, the author of Parenting Beyond Belief and Raising Freethinkers, has a theory about this:

It’s not that atheists don’t want to give money to these (non-atheism-related) causes or that we’re unable to. It’s that we don’t have an effective means for giving. There’s no systemized way of helping all these causes we Humanists care so much about.

A solution is coming. 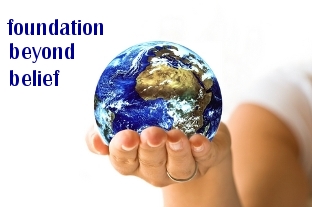 I’m thrilled to help my friend Dale launch Foundation Beyond Belief. This is his brainchild and I’m proud to be supporting it as a board member.

Foundation Beyond Belief is a new charitable and educational foundation created (1) to focus, encourage and demonstrate humanistic generosity, and (2) to support a nationwide nonreligious parent education program.

The Foundation will highlight one carefully-selected charity per quarter in each of ten categories — health, hunger/poverty, environment, peace/nonviolence, child welfare, education, human rights/free expression, animal welfare, a featured small charity, and nonreligious parent education. Members can join the Foundation by signing up for a monthly automatic donation in the amount of their choice, then set up personal profiles to indicate how they would like their contribution distributed among the ten categories.

Our featured charities will not be limited to explicitly humanist organizations but to those that fulfill of the central value of humanism — caring for each other, for this life and this world. Carefully selected for impact and efficiency, they may be founded on any worldview so long as they do not engage in proselytizing. At the end of each quarter, 100 percent of the donations will be forwarded to the featured organizations and a new slate of featured charities selected.

And since Foundation Beyond Belief will be a registered 501(c)(3) non-profit, all donations made will be tax-deductible.

I’m only mentioning the organization now. In October, a basic website will be launched; In January, the full website.

What can you do until then?

Join the FBB Facebook Cause group. If you’re not on Facebook, just pass along your email address here so we can keep you updated.

And if you can’t wait to donate (and don’t care about the tax-deductions), you can send a donation of any amount via PayPal.

June 1, 2009 Have You Ever Received an Atheism-Related Death Threat?
Browse Our Archives
What Are Your Thoughts?leave a comment