Rational Comedy for an Irrational Planet May 28, 2009 Guest Contributor

Rational Comedy for an Irrational Planet

Every so often, I go to this show in Chicago where the actors perform 30 plays in 60 minutes. The plays can be funny, sad, political, symbolic, etc. Each of them has a cryptic title that may or may not tell you what the play is about…

Last year, one of the plays I saw was titled “Helium.” When they performed it, the stage became dark. When the lights came up, one man stood in the center of the stage holding a very large beach ball. He didn’t move. The lights went out again for a brief moment. When they came back up, two other actors were standing on either side of him, holding smaller beach balls.

Then, the two actors with the smaller beach balls began to run around the center guy. After about 10 seconds of this, the play ended.

I understood it. I thought it was funny, especially given the serious nature of some of the other plays. Apparently, only three other people in the audience felt the same way. The rest of the crowd just looked puzzled and lost.

That gives you a good idea of what sort of humor gets me going… and probably why I’m single.

So it’s no surprise that I loved Brian Malow when I saw a clip of him on YouTube last year — Malow is a Science Comedian. He’s like a one man version of The Big Bang Theory.

The Agnostic and Atheist Student Association at UC Davis is bringing Malow to their campus and the event is open to the public! 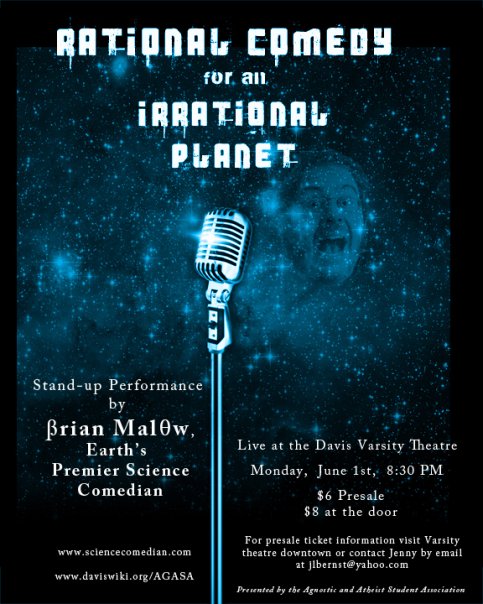 Like the poster says, the event is on Monday, June 1st at 8:30 p.m. at the Davis Varsity Theatre. Tickets are $6 in advance (info for that here) and $8 at the door.

Go support the group and meet other like-minded science geeks 🙂

If I were living within 200 miles of Davis, I would totally go to this.