This Sunday, Rebecca Rubin will go on sale. She’s the latest American Girl doll in the collection. 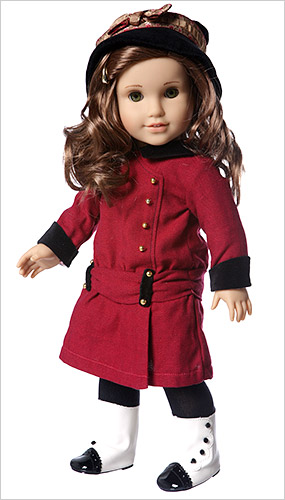 (photo via The New York Times)

What makes her unique?

She is a 9-year-old girl living on the Lower East Side in 1914 with her Russian-Jewish immigrant parents, siblings and a grandmother known only as Bubbie.

(Apparently, people thought the Molly character was Jewish, but they were wrong.)

Obviously, they’re referring to Rebecca’s cultural identity. But does the Jewish label apply to her religious beliefs as well? (One of the books featuring Rebecca has a chapter titled “A Sabbath Surprise“…)

Does Rebecca not believe Jesus is the Son of God?!

Rose at the Jewmanist has a lot of questions about this new doll:

Does this mean all the others must be Christian by default? How do dolls have religions anyway? Are they like that of animals, even though they have human features? Do they pray? To the same god as their owner or to a different Doll God?

I’ll admit: it’d be pretty cool if Rebecca turned out to be a Secular Jew. Just think of the family conflict in that book!

Seriously, American Girls people…. reach out to the rest of us.

May 28, 2009 Rational Comedy for an Irrational Planet
Browse Our Archives
What Are Your Thoughts?leave a comment