The district permits free Bibles to be put out for students; but there’s a fine line between non-school literature that’s “put out” and “given out.”

Gideon volunteers have visited both her children’s campuses with Bibles in tow. It’s part of the Frisco ISD’s rotating schedule that permits the religious group in some schools for one day.

The Gideons once handed out their Bibles along a public sidewalk in Frisco, but after too many parent complaints to the police department and the school, the district decided to move things inside. School officials said it’s the only way to control the situation.

The district admits that it has had to remind representatives of the Gideons to not approach children; that’s the only way the volunteers are allowed in schools.

They were troublesome outside… so they let them into the schools?! How does that make any sense?

There’s a simple way to combat this, of course. Get volunteers to “put out” copies of atheist literature. Let’s bring the Koran, too, while we’re at it. Hell, get them all there the same day as the Christians and let’s have a free-for-all.

Here’s the other thing I found disturbing. On the WFAA-TV website where this story appeared, it opened with this picture and caption: 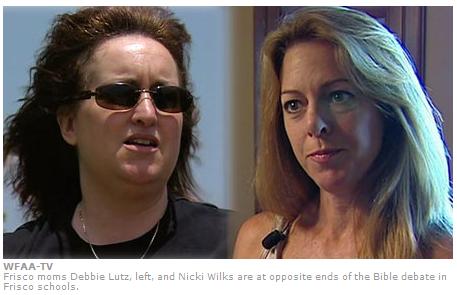 I took an educated guess before reading the article. Turns out I was right. I imagine most of you will be, too…

May 17, 2009
Atheist Will Pass Along Christians' Messages When They Get "Raptured"... Is He Ethical?
Next Post