Holy Hullabaloos is a novel approach to a book. Jay Wexler is a Professor at the Boston University School of Law and the separation of church and state is an issue that has always been important to him.

The book documents his road trip to many of the battlegrounds of major church/state cases. You get both first-hand accounts of what these places are like along with the history of what happened. 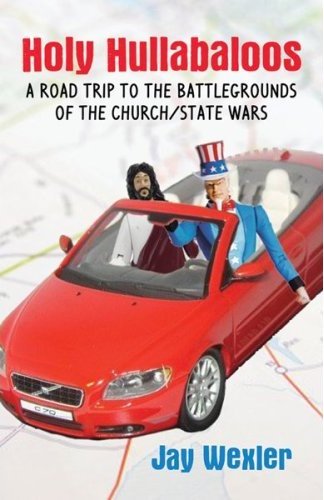 Among his visits: Wexler goes to Santa Fe, Texas, where the Supreme Court ruled that a student could not deliver a prayer over the public address system before football games. He also visits Grendel’s Den, a restaurant and bar, in Massachusetts. The bar was denied a liquor license when it first opened because a nearby church objected to the bar’s presence. The Supreme Court ruled that the church’s influence here was unconstitutional.

It’s a very interesting way to go beyond the legal decisions and see these places first-hand.

I’m not a fan of the title and I think this book would’ve been so much better with pictures of the locations scattered throughout, but I did learn a lot. It’s definitely more enjoyable than reading a Wikipedia entry on these cases, and you do get a more comprehensive look at these places than you would in any textbook.

Wexler was kind enough to answer my questions (I threw in links when necessary):

I hope that religious leaders, if they read the book, come to understand that atheism is a legitimate perspective that the government should respect. I also hope they understand — as I hope non-religious leaders will, too — that it’s possible to talk about these controversial church-state issues with some levity. Maybe not all the time, but at least some of the time.

What was your favorite place to visit?

They were all pretty fun places. Rural Wisconsin is beautiful, and New Glarus beer is delicious. Also, all the Limburger cheese in America comes from this one county I visited in Wisconsin, so that was pretty great. Visiting the US Senate, and listening to the Chaplain give the prayer at the beginning of the session, though, was something I had wanted to do for a long time. When you read those prayers in the Congressional Record, they seem banal. But when you hear the Chaplain say them in the Senate hall, they take on a whole different feel. Much more powerful — and more dangerous.

What did you find out on your trip that you never would have learned in law school?

Well, one example is my visit to Kiryas Joel, where the Satmar Hasidim live. There’s simply no way to appreciate the uniqueness of that community without going there. I had previously thought that maybe some non-Satmar might want to live in that community, but having seen the place, I can testify now that it would be extremely surprising if someone who was not a Satmar wanted to live there.

Were there any places you were unable to visit on your trip?

Oh, there were many, and if anyone wants me to write a sequel, I’d be delighted. I didn’t make it West of the Mississippi River, for example. I wish I had had the time and resources to visit some Native American communities and find out their views about the religion clauses were. Maybe the community in Oregon where the Smith peyote case came from.

What themes did you find among your visits? Were certain areas more likely to be hotbeds for church/state issues?

I think that church/state issues can pop up anywhere where there are diverse opinions about religion, which in the United States means just about anywhere. So there are of course a lot of controversies about these issues in the south — like in Texas — but there are also plenty of them right here in the northeast.

As to themes, I guess what I might say is that the people I talked to, whether they were religious or not, whether they were members of majority sects or minority ones, all seemed pretty thoughtful about the issues. Clearly there can be a lot of anger and spite when it comes to questions of separation, but there are a lot of people out there who show great sensitivity to those they disagree with as well.

Which church/state issue do you feel is most important for atheists to be knowledgeable about?

They’re all pretty important, and it’s not hard to learn about all of them. To me, it’s the issue about religious displays and symbols that I find the most compelling. I doubt that as atheists we will ever succeed in getting “In God We Trust” off the currency, but we can continue to have some successes in demanding that government not put up displays that go too far in endorsing religion. The so-called “endorsement” test is hanging on by a thread, though, with the retirement of Justice O’Connor, and so atheists need to be aware that the next few Supreme Court nominations might turn out to be very important for this issue.

What has the Supreme Court gotten right and wrong in these cases?

I think the endorsement test, in theory, is the right test for evaluating religious displays and symbols, though the Court hasn’t always applied it correctly. The Court has also now over-simplified the issue of public funding of religious schools. On the other hand, the Court has gotten both of its evolution cases right and its decisions regarding school prayer are correct as well, which the Court should get a lot of credit for, since they were (and continue to be in some places) quite unpopular.

What questions should our politicians be asking prospective Supreme Court nominees to make sure church/state separation is upheld?

I think that nominees are sufficiently savvy these days that they’re unlikely to answer questions in a way that will get them in trouble, but right now they should be asked whether they believe stare decisis (adherence to precedent) is an important value in the religion clause context (and elsewhere too), since both the continued vitality of the endorsement test and the current rule that direct funding of religious organizations can’t be used for religious purposes are both up in the air at the moment.

Should public school students be required to say the Pledge of Allegiance (with “Under God” in it)? Should “In God We Trust” appear on our money? What cases should church/state separation proponents be going after? Which cases would likely be the most successful for us?

Public school students actually do not have to say the Pledge of Allegiance, with or without “under god” in it. The Court decided that many years ago in a case called Barnette. But the question remains whether the teacher can nonetheless lead the class in the pledge, since nonbelievers might feel coerced into saying “under god” through peer pressure (there’s also the issues of whether the Pledge is an endorsement of religion and whether “under god” was added into the Pledge for a religious purpose; the answer to both is yes, in my view). I think that under current Supreme Court doctrine, teachers should not be allowed to lead their classes in the “under god” version of the Pledge. I’d rather have “In God We Trust” off our money, but I doubt that will ever happen. The issue for atheists and separationists is whether to go after these cases that are clear losers in the Court or the ones where if we win, there will be such a backlash that we really end up losing. My own view is to stay away from those cases and focus more on the display and funding cases, but I appreciate that other atheists will differ on this. For example, I respect Mike Newdow a lot (he even wrote the theme song for my book, which I urge you to check out on www.holyhullabaloos.com), even though I might personally not bring the cases that he has chosen to bring.

Holy Hullabaloos will be in bookstores on June 1st but you can pre-order it on Amazon today.