This post is by Jesse Galef, who works for the American Humanist Association

So the 2009 National Day of Prayer has come and gone.  Obama issued a proclamation as mandated by congress, but he didn’t hold a ceremony as his predecessor had.

Ok, here’s the good news about the proclamation: it’s the best National Day of Prayer proclamation we’ve seen.  Here’s the beginning of the 2008 proclamation given by Bush:

America trusts in the abiding power of prayer and asks for the wisdom to discern God’s will in times of joy and of trial. As we observe this National Day of Prayer, we recognize our dependence on the Almighty, we thank Him for the many blessings He has bestowed upon us, and we put our country’s future in His hands. 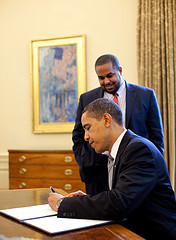 Quite a contrast with Obama’s proclamation, who once again goes out of his way to include us:

On this day of unity and prayer, let us also honor the service and sacrifice of the men and women of the United States Armed Forces. We celebrate their commitment to uphold our highest ideals, and we recognize that it is because of them that we continue to live in a Nation where people of all faiths can worship or not worship according to the dictates of their conscience.

You can see why I consider Obama’s proclamation a step up.  As far as I could find, he’s the first one to include non-believers in these proclamations.

Here’s the bad news: it’s still a National Day of Prayer proclamation, and Congress still requires our President to issue these blatent constitutional violations every year.

Even Obama’s should be considered unconstitutional, officially declaring: “I call upon Americans to pray in thanksgiving for our freedoms and blessings and to ask for God’s continued guidance, grace, and protection for this land that we love.”  It’s no different than if had he called upon Americans to ask for Jesus’ guidance, or called upon us to attend Catholic Mass.  Being more vague in the request doesn’t make it constitutional.

Elected officials have no religious role in our secular government.  They cannot dictate the religious observance of citizens.  Freedom of religion means the freedom to decide how – and whether – to worship according to the dictates of conscience.

As is usually the case, Thomas Jefferson understood.  In a famous letter to Rev. Samuel Miller, Jefferson declined to make a religious proclamation, explaining that “civil powers alone have been given to the President of the U S. and no authority to direct the religious exercises of his constituents.”

More unexpectedly, you know who else understood?  Then-Governor Jesse Ventura, who refused to issue a National Day of Prayer proclamation in 1999, saying: “I believe in the separation of church and state. We all have our own religious beliefs. There are people out there who are atheists, who don’t believe at all….They are citizens of Minnesota, and I have to respect that.”

Like the rest of you who saw the movie Predator, I was surprised to read that.

May 8, 2009
Can Praying Be Considered Religious Intolerance?
Next Post

May 8, 2009 What Child Milestones Can an Atheist Contribute?
Browse Our Archives
What Are Your Thoughts?leave a comment