New Orleans’ “Day of Reason” a Success May 8, 2009 Guest Contributor

I mentioned a couple days ago that New Orleans was planning a Citywide Day of Reason thanks to a local atheist group.

You can see the city’s official proclamation here (PDF).

Yesterday, when Harry had finished his secular invocation and the audience was standing and waiting for the Presentation of the Colors, a different Council Chaplain, Reverent Norwood Thompson, Jr. of the Southern Christian Leadership Conference, went to the microphone and said that while we were waiting, we could bow our heads in prayer.

This time, to the credit of the Council President, Jacquelyn Clarkson, she interrupted the Reverend saying that as Mr. Greenberger had just given a secular invocation, a prayer would not be appropriate.

One of the council members even sent a thank you note to Greenberger: 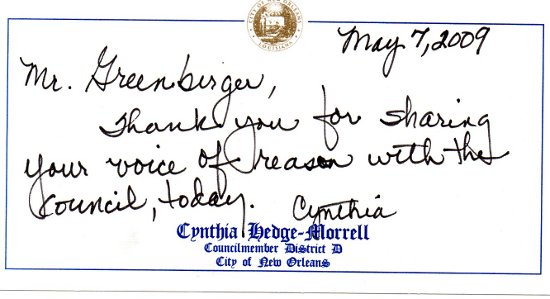 How awesome is that?

Did anyone else’s city celebrate National Day of Reason festivities?

***Update***: Here is the wording of Greenberger’s invocation:

When I requested placement on the rotation for invocations before this Council, I did so with a broad interpretation of “invocation,” which includes, in addition to prayer, an appeal, a petition and an earnest call.

It is especially appropriate on this day, simultaneously a national Day of Prayer and a national Day of Reason, that I should appeal to “reason,” by this Council and all other agencies of government–not only on this celebrated day, but throughout the year.

Here’s what two of our Presidents, our last and our first, have said:

President George Washington, one of our Founding Fathers, wrote: “May the children of the stock of Abraham who dwell in this land continue to merit and enjoy the good will of the other inhabitants—while every one shall sit in safety under his own vine and fig tree and there shall be none to make him afraid.”

As you reasonably deliberate matters affecting our city, be mindful of all of its minorities — those of us sitting under our own fig trees. To that we should all say “amen.”

May 8, 2009 1 in 20 Atheists Prays Daily
"Or demon.https://uploads.disquscdn.c..."
CageGirl Pastor: This Blurry Picture from 1980 ..."
"Had to share this one, it's too good not to. Had an ex-gf who was ..."
Makoto After Rejecting Face Masks, Idaho Pastor, ..."
"I think you swapped the roles here: "You can bet Senate Majority Leader Mitch McConnell ..."
James Ruth Bader Ginsburg’s Death Could Mean ..."
"In more ways than one, perhaps."
CageGirl Pastor: This Blurry Picture from 1980 ..."
Browse Our Archives
What Are Your Thoughts?leave a comment