Just in time for the National Day of Prayer, we’re reminded of another national pastime for Christian conservatives: lying. 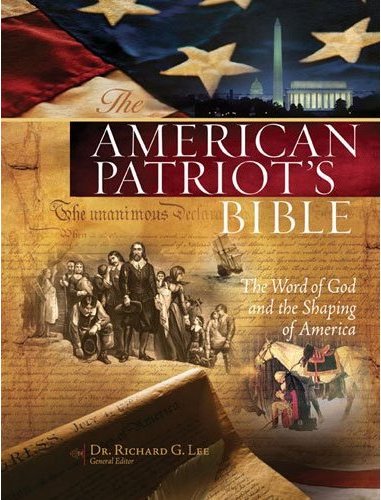 The American Patriot’s Bible is surely a new textbook for homeschooling parents. Because no sane public school district would allow this garbage to infest its young minds.

Equal rights? How can you be proud of your equal rights history when you are the reason gay people don’t have them?

At least some Christians are disturbed by the idea of this book. Check out this review on Amazon:

As an Evangelical Christian, I love the Bible. I also love this country, and I am descended from a line of men who have served in the American military since the Civil War era. However, I am deeply disturbed by this Bible and by the nationalistic “Christianity” that it exemplifies.

To conflate American Patriotism and militaristic American Nationalism with Christianity is to turn America’s Wars into Holy Wars. To literally weave together the Scriptures and the Flag, presenting them as one united and holy blend, is unholy. The effect is to create an “American Jesus” who is really a War God. With all my heart, I believe that to print The American Patriot’s Bible is to desecrate the Word of God.

But after the anger has burnt off, I am just saddened by this Bible, deeply saddened, because I know that many American Christians, even some who attend my own church, will not feel revolted by it at all. I am terribly afraid that Thomas Nelson made a wise business decision in producing this blasphemous Bible.

Please know that there are American Christians deeply wounded and ashamed of the existence of this Bible.

The American Patriot’s Bible is a sick attempt to keep intact the unfortunate and mistaken idea of manifest destiny. While the discussion of Christianity & American Patriotism is an interesting one, to blend the too in a bible is blasphemous. If you believe that Jesus did not teach us to love our enemies or to pray for them, and instead you would like to kill them (believing that such violence is blessed by God) then this is the Bible for you. As a Christian, I repent for the existence of this horrific book.

And the atheists haven’t even reviewed the book yet.

More (mis)information can be seen in a promo video for the book.

(via WTF Would Jesus Do?)

May 7, 2009
Should Atheists Parents Stop Their Kids From Mocking Religion?
Next Post