This is a great contrast to the National Day of Prayer.

In 2005, the New Orleans Secular Humanist Association was issued the following Proclamation from Mayor Ray Nagin to celebrate the National Day of Reason: 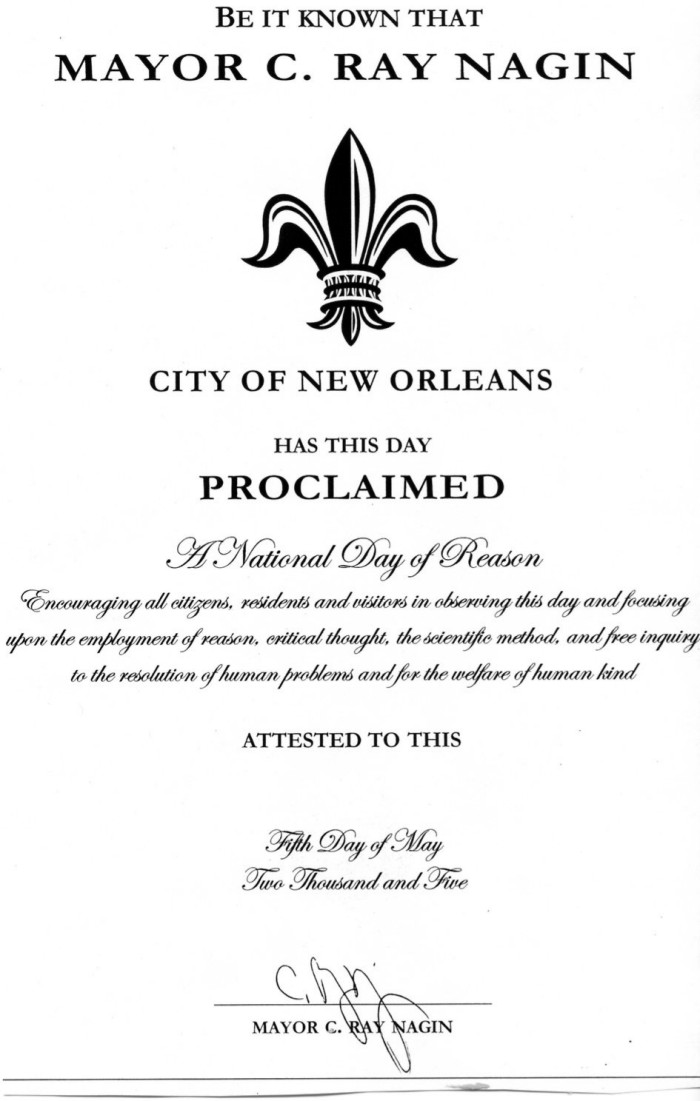 This year, they’ll be awarded a proclamation for a Citywide Day of Reason signed by all of the New Orleans City Council Members.

WHEREAS, the foundational documents of the United States of America were born of the Enlightenment, incorporating a commitment to the principles of reason, tolerance, morality, democracy, and human rights for the first time in history and enabling ethical interactions among people; and

WHEREAS, the United States has been a world leader in many of the fields of endeavor that rely on reason, including scientific and medical research, social reform, international law, and progressing and promoting the ideals of democratic government; and

WHEREAS, on this date in 1732, the French crown reinstated its Superior Council, a precursor to this lawmaking body, as the executive, legislative, and judicial administrator of the newly founded settlement that became the City of New Orleans, and this group effectively utilized the powers of reason to provide law and governance to what was to become one of the most pre-eminent cities in North America; and

WHEREAS, New Orleans – its people and its institutions – must use reason and its corresponding principles in all phases of the recovery in order for the city to represent the progress that its leaders embodied on this day in 1732; and

WHEREAS, the consistent application of reason offers hope that we may resolve the many challenges facing humanity, whether environmental, military, economic, or social, and the specific challenges facing post-Katrina New Orleans, NOW THEREFORE,

BE IT PROCLAIMED BY THE COUNCIL OF THE CITY OF NEW ORLEANS that the Council hereby proclaims today, Thursday, the 7th day of May, 2009, a citywide Day of Reason, and encourages all citizens, residents, and visitors to join in observing this day by focusing on the employ of reason, critical thought, and free inquiry, both their history in this country and this city and their ability to resolve problems and care for the welfare of humankind.

How amazing is that?

In addition, group president Harry Greenberger will be opening the Council Meeting on Thursday with a secular invocation.

Doug Stewart, a member of NOSHA, asks this question to other atheists:

Why can’t any atheist organization with a City Council at least ask for something like this? If we can do it in the deep South, surely we can do it anywhere?

Maybe one day the President would be signing a National Day of Reason Proclamation?

We can start small and dream big.

Thanks for NOSHA for setting some fantastic examples for the rest of us.

(Thanks to Doug for the link!)