I don’t get why everyone gets so offended by every depiction of their gods. Especially when those gods have nifty attack moves. 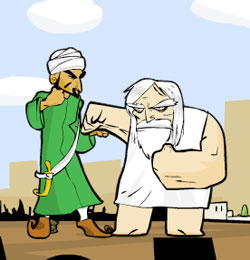 There are two versions of the game, normal and uncensored. One features Muhammad (fighting God in the image above). The other features the same character with his face blocked out by a black circle.

The obvious solution here is to remove the game from the Internet. (Because this game is the most offensive thing on it.)

‘This game is going out of its way to upset people and I think it should be taken off the internet,’ said Douglas Miller, pastor of the Link Church in Birmingham.

‘Playing violent video games will ultimately affect your behaviour and this game is deeply offensive and provocative.’

Oh, please. If this game encourages anyone to float in air or shoot a fireball at the opposition, I’ll bite my tongue.

You could also… you know… not play it.

I played as Buddha and beat the game in a few minutes.

The final battle takes place against the *ultimate* religious icon.

The Flying Spaghetti Monster makes an amusing, random appearance in the game.

April 28, 2009 Obama's Speech to the National Academy of Sciences
Browse Our Archives
What Are Your Thoughts?leave a comment