Yesterday, the Pew Forum on Religion & Public Life released the results of a survey on religious affiliation. Here’s what they found:

They focused on people who were raised as Catholics and Protestants. I was most interested in the ones who later became “unaffiliated.”

For Catholics, the top reasons for leaving the faith include no longer believing in the Church’s teachings and the Church’s stance on homosexuality/abortion: 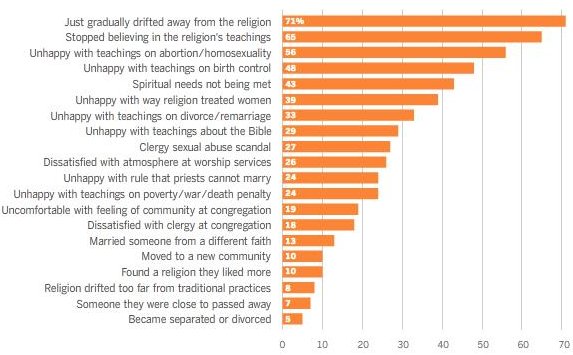 For Protestants, the top reasons for leaving the faith include no longer believing in the Church’s teachings and problems with church services themselves: 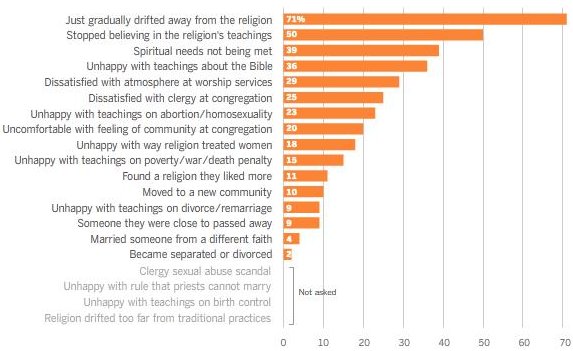 What does this mean for atheists?

For one, it means one of our main areas of criticism should continue to be attacking religious teachings — pointing out the myriad ways that priests/pastors are misinformed about what they talk about, liberal with their use of facts, and hypocritical. Also, we need to keep pointing out where the Bible gets it wrong.

We need to continue to provide alternatives for people who want to leave their church — a place for community and family and personal/emotional/”spiritual” growth, that doesn’t involve religion.

If you’re rolling your eyes, you should look at the graphic for why people who were raised without religion later became religious: 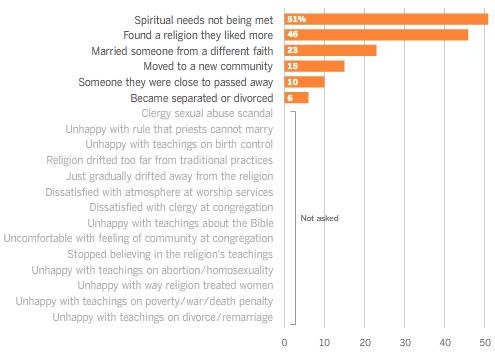 The biggest reasons for switching to a faith included not having spiritual needs met, finding a religion worth crossing over to, and moving to a new community.

If we can offer the benefits of religion, without the supernatural mythology, we would be addressing these issues directly.

April 28, 2009 Fewer Christians, More Atheists
Browse Our Archives
What Are Your Thoughts?leave a comment