This isn’t even subtle: 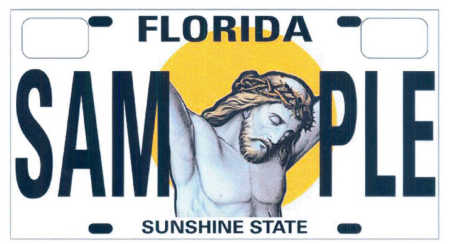 This image was snuck through the Florida Senate:

Religious specialty plates offered by Sen. Ronda Storms, R-Valrico, and Sen. Gary Siplin, D-Orlando, made it onto a bill Friday even though many members had not seen images of those plates and none was produced for the debate.

Siplin didn’t mince words when asked what his “Trinity” plate looks like, saying, “It has a picture of my Lord and savior Jesus Christ.” It, along with a “Preserving the Past” plate offered by Siplin, would benefit the Toomey Foundation for the Natural Sciences.

Storms’ “I Believe” plate would benefit Faith in Teaching, an Orlando company that funds faith-based programs at schools. Its design features a cross over a stained-glass window.

(So the image you see above was a Democrat’s idea? Ugh. I suppose it’s a Florida thing…)

The article benefits two groups, according to the article. The first is Faith in Teaching — their website is down, but the cache is up.

The other is the Toomey Foundation for the Natural Sciences — they have Bible verses on the home page.

How do either uphold a separation of church and state? I don’t know.

At least the Florida House rejected those plate ideas.

This is just setting bad precedent. No one is forced to buy these plates, but what’s the line between accepting a plate and rejecting it? What is there was a demand for Mohammad license plates? FSM plates? “I Hate Florida” plates?

If everyone gets to choose, that’s just going to lead to more problems.

April 27, 2009 The Hand of God
Browse Our Archives
What Are Your Thoughts?leave a comment