When I heard about the following program at PromiseLand West church in Austin, Texas, I got excited: 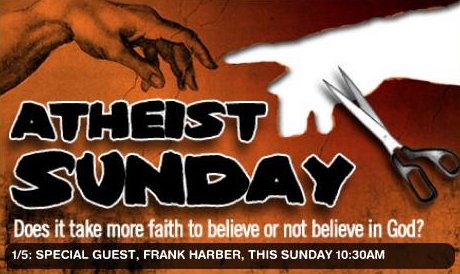 I love it when churches do this! They are asking which side of their theological spectrum makes more sense — belief or non-belief in God. Of course they’re going to say belief makes more sense. But it’s a chance for the other side to be heard and critiqued.

Anyway, I’ve done a few events like this. I get up on stage and the pastor and I discuss (not so much debate) our major issues with the other person’s views. The audience is allowed to ask questions to the two of us. It can be a really powerful event… especially for Christians who have been sheltered by their families from ever hearing opposing viewpoints.

When I heard about this particular event, I felt that if that church were anywhere near me, I would go. And I would bring atheist friends with me.

If your goal as a pastor is to get “unsaved” people to step inside your church, this is a fantastic way to do it.

Too bad this church fails.

Frank Harber, the man who is the special guest, is not an atheist. He’s a Christian pastor who used to be an atheist. (Much like Lee Strobel.) Apparently, PromiseLand West thinks that’s the same thing.

Most atheists have heard the arguments of “former atheists.” They’re weak, cliché, and easy to debunk.

As Eileen Flynn writes in Of Sacred and Secular:

… So there won’t actually be a debate going on. But [Pastor Randy] Phillips is hoping that skeptics will hear Harber’s story and reconsider their views.

To do that, you’d have to get atheists to enter your church. That’s not going to happen.

It would’ve been far more interesting if the church invited an atheist (Dan Barker comes to mind) to speak about why he left Christianity. After he talks, have small group discussions at the church about what the speaker said. Let the church staff explain the problems they find with the atheist’s arguments.

I guarantee more people would find that discussion interesting. Real dialogue would happen. The church, I imagine, would grow spiritually as a result.

As it stands, Pastor Phillips doesn’t have the courage to bring real atheists to his church to share their stories.

I predict he’s not going to get more than a few atheists to show up. And a couple of those will come only because of the misleading advertisement.

April 24, 2009 How I (Ron Gold) Became an Atheist
Browse Our Archives
What Are Your Thoughts?leave a comment