Check out this ad (PDF) that the Family Institute of Connecticut (FIC) placed in the Connecticut Post (click for larger image) a few days ago: 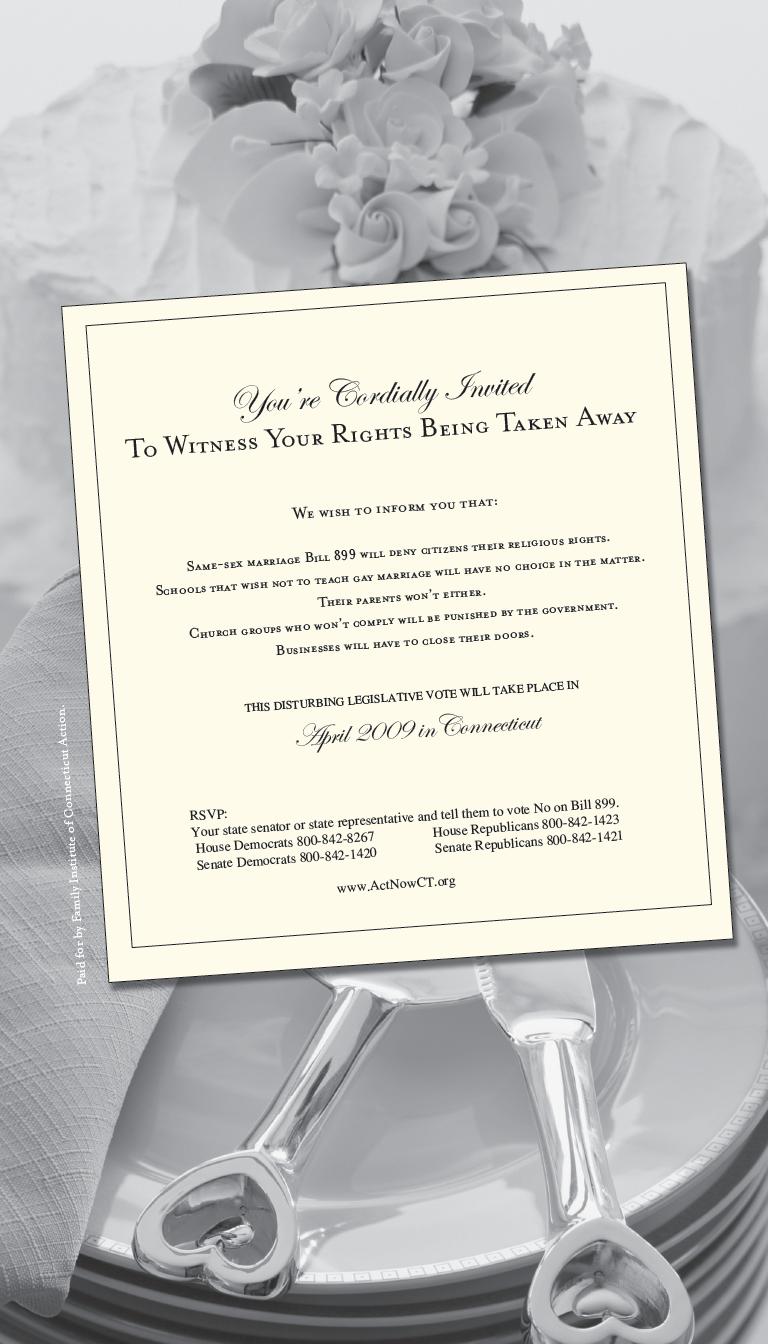 To Witness Your Rights Being Taken Away

We wish to inform you that:

Schools that wish not to teach gay marriage will have no choice in the matter.

Their parents won’t either.

Church groups who won’t comply will be punished by the government.

Business will have to close their doors.

THIS DISTURBING LEGISLATIVE VOTE WILL TAKE PLACE IN

It must be a contest: “How much bullshit can you pack into one advertisement?”

Several people are speaking out about the lies, including Lee Reilly, the president of the Secular Student Alliance at Sacred Heart University:

… In regards to religious rights, no group of citizens has been more protected over the course of our nation’s history than religious groups. They are given more leniency in the tax structure than all nonprofit charities, can conduct any kind of assembly that may otherwise be deemed hateful outside of religion, and are allowed to vigilantly protest bills like this one openly and freely.

By allowing this ad to be printed, the Connecticut Post has promoted intolerance and ignorance. If fellow readers feel strongly about this nonprofit’s actions in advancing lies into the general public, then please speak up. Let the same state representatives that this group asks you to contact know how you feel about this bill, oppressive behavior by religious factions and the actions of our beloved local newspaper.

As for the specific points: they’re easy to rebut. Bill of Bill and Kent’s Place does this quickly:

“Schools that wish not to teach gay marriage will have no choice in the matter.”

I don’t even know how you teach gay marriage. How do you teach straight marriage?

“Business will have to close their doors.”

Huh? Why? Are you crazy? Do you have any idea how much revenue this will bring to caterers, wedding planners, and the like?

I know the analogy isn’t perfect, but if you replaced “Same-sex marriage” with “Interracial marriage” in the ad, it never would have been allowed to run.

Thanks for showing some Christian love, FIC.

(Thanks to Beau for the link!)