How Does Religion Contribute to Views on Global Warming? April 17, 2009 Dr. Denise Cooper-Clarke

How Does Religion Contribute to Views on Global Warming?

This guest post is by Jesse Galef, who works for the American Humanist Association. He usually blogs at Rant & Reason.

The Pew Forum is a reliable source of interesting surveys. This most recent one shows how strongly various religious groups believe that global warming is occurring and if so, whether the warming is caused by humans or not. 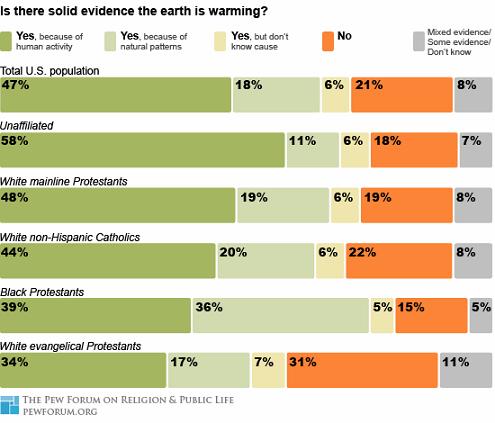 One number that does puzzle me is that 36% of Black Protestants believe that the Earth is warming, but due to natural patterns and not human activity. It’s twice that of the US population as a whole, and triple that of the unaffiliated. Why would that be?

But otherwise, the findings don’t surprise me. The most likely group to believe that humans were causing a global warming? Those unaffiliated with a religion, at 58%. Those least likely? The self-identified White evangelical Protestants, at 34%.

I’m guessing there are confounding factors — perhaps White evangelical Protestants are more likely to get their news from one particularly biased source or perhaps it’s a geographical effect.

But when Congressman John Shimkus reads from Genesis in a congressional hearing and proclaims that “The Earth will end only when God declares it is time to be over. Man will not destroy this Earth, this Earth will not be destroyed by a flood,” it’s difficult to dismiss the idea that religion is a contributing factor to their disbelief in man-made global warming. Perhaps their faith in that promise is so strong that they don’t believe the mounting scientific evidence.

On the other hand, we have to ask: why are these Hong Kong Christians building a full-scale replica of the ark?

April 17, 2009
TrueTolerance: Christians Against the Day of Silence
Next Post

April 17, 2009 Missionary Deconverted by Amazon Tribe
Browse Our Archives
What Are Your Thoughts?leave a comment