Get Ready for More Muslim Riots?

You remember this cartoon…: 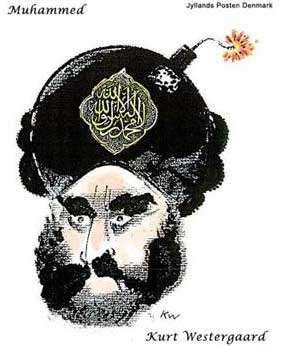 1,000 signed prints of that famous Kurt Westergaard image are now on sale courtesy of the Danish Free Press Society:

One thousand prints of the cartoon, featuring the prophet wearing a turban with a lit fuse stuck in it, are up for sale for US$250 (S$379) on the group’s website.

Each print is numbered and signed by the cartoonist Kurt Westergaard.

‘Now you can own an exclusive print of the most famous picture of our time,’ the site said.

Westergaard, 73, is one of 12 cartoonists whose drawings of the Muslim prophet were first published in Danish newspaper Jyllands-Posten in September 2005, sparking controversy among Muslims worldwide.

He has since been the subject of threats, forcing him to live in hiding.

If you’d like to purchase the image, the link is here.

Does anyone know whatever happened to the original drawing?