Brigham Young University’s student newspaper — The Daily Universe — had to recall all 18,500 copies of Monday’s paper on account of a slight typo.

A caption for a picture should have said the following:

Instead, it read as follows:

Nice. An innocent mistake by an editor under deadline pressure.

“Our copy editor in charge of the front page, who was under deadline pressure, was using spell check on her page and had misspelled the word apostle,” [editorial manager Rich] Evans said. “One of the first options that came up on InDesign’s spell check suggestions was the word apostate. Unfortunately that’s the one she clicked on. It still should have been caught by two more levels of review after that, but again with deadline looming, the worst possible thing happened.” 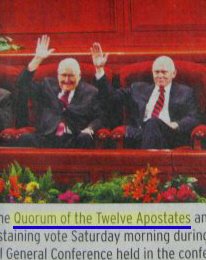 Even more amazing is how big of an issue this has become. The Daily Universe has issued a full-length article explaining the mistake as well as a brief “we regret the error” paragraph. They’re still apologizing.

Meanwhile, I assume the staff of the paper still believes the whole Joseph Smith story… which makes me worry more about their credibility, not their typos.

Anyway, can anyone else suggest a funnier typo to be found in that newspaper?

April 8, 2009
What Do Non-Religious People Call Themselves?
Next Post