James Randi and JREF recently had their YouTube account suspended because of a copyright violation. The violation was addressed and resolved and their account is now back online.

While this may have been a fair reason to suspend the offending video, YouTube may have crossed the line by suspending the entire account.

JREF is fortunate in this case, too. They were able to resolve the issue amicably. It also helped that so many atheists wrote YouTube and complained. Other groups (like the Rational Response Squad) routinely have individual videos or their entire account taken down for no apparent reason — presumably, religious people are just offended by what they see.

We can help fix this problem, though.

Atheists no longer have to rely on YouTube to share their videos (or worry about YouTube suspending their accounts). There’s now a one-stop shop if you want to watch videos for/about/by other atheists. 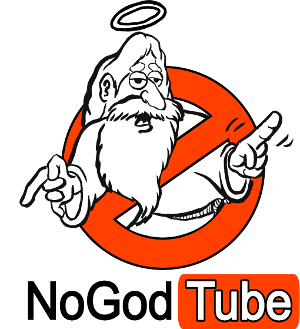 The name is in response to GodTube (since renamed Tangle).

It was begun by a group of people including Brother Richard, from Atheist Nexus and the blog Life Without Faith, who says this:

With NoGodTube, we can continue to debate, but on our terms. Theists will be able to present their arguments based on reason, but if they disagree with our responses, they won’t be able to get us banned or flame us. Best of all, we can use NoGodTube to preserve our arguments for posterity.

Some may argue that we will be biased because of our name, NoGodTube. The way I look at it, the statement, “No God” is the default position. Just like “No Unicorns” is the default. The burden of proof is on the believer.

NoGodTube will be in Beta for quite some time, so I hope everyone will be patient with us. If anyone would like to offer suggestions, help out with the design, or volunteer as a moderator, send us an email from the Contact Us page.

I’m hoping this site can be successful. I fully expect atheists to put their videos on YouTube where it has a wider audience, but I hope they will store them at NoGodTube as well.