Newsweek: The End of Christian America

The echoes of the ARIS survey findings are still being heard.

In a Newsweek article titled “The End of Christian America,” Jon Meacham talks about how power is shifting away from the Religious Right.

Before we get to the article, though, let’s talk about this cover: 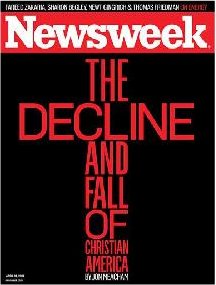 It’s complete exaggeration, similar to the overblown Time cover from 42 years ago, which asked, “Is God Dead?”

The shift may be happening, but there’s no doubt as to where the power still rests. Christians make up most of the population and (too) many of them have influence in the political arena.

The End of Christian America? Hardly. That’s like saying $100 shoes now cost $90… the slight drop does not mean the shoes will be free anytime soon. A 10% decline in the number of self-professed Christians doesn’t mean they’re about to go away.

There it was, an old term with new urgency: post-Christian. This is not to say that the Christian God is dead, but that he is less of a force in American politics and culture than at any other time in recent memory. To the surprise of liberals who fear the advent of an evangelical theocracy and to the dismay of religious conservatives who long to see their faith more fully expressed in public life, Christians are now making up a declining percentage of the American population.

According to the American Religious Identification Survey that got [president of the Southern Baptist Theological Seminary R. Albert] Mohler’s attention, the percentage of self-identified Christians has fallen 10 percentage points since 1990, from 86 to 76 percent… Meanwhile, the number of people willing to describe themselves as atheist or agnostic has increased about fourfold from 1990 to 2009, from 1 million to about 3.6 million. (That is about double the number of, say, Episcopalians in the United States.)

The numbers are nice, but we’re still in the minority and far too many Americans hold irrational beliefs.

A third of Americans say they are born again; this figure, along with the decline of politically moderate-to liberal mainline Protestants, led the ARIS authors to note that “these trends … suggest a movement towards more conservative beliefs and particularly to a more ‘evangelical’ outlook among Christians.”… there is no doubt that the nation remains vibrantly religious — far more so, for instance, than Europe.

Meacham points out that we have been winning the culture wars lately (stem cells, gay marriage, evolution), which is a positive sign, but we still have a long way to go. Evolution is still being challenged, 47 states still ban gay marriage, and only one Congressperson is openly non-theistic.

I’m surprised Meacham wrote the article with little reference to any non-religious people helping bring about the change (there was only a brief mention of Christopher Hitchens).

On a positive note, it’s nice to hear that atheists are beginning to speak out. Imagine if everyone who didn’t believe in a god said as much. Think of how those numbers would change. I believe any reports of the number of atheists are underestimated. Many of us refuse to come out of the closet, even anonymously.

Until that stigma is gone, and atheists can speak openly about who they are, Christians will still have the upper hand.