I’ve mentioned the notion of de-baptisms before — renouncing your childhood faith at a later age. De-baptism certificates took off in Italy last year and they’ve spread to London:

More than 100,000 people have recently downloaded “certificates of de-baptism” from the Internet to renounce their Christian faith.

The initiative launched by a group called the National Secular Society (NSS) follows atheist campaigns here and elsewhere, including a controversial advert displayed on London buses which declared: “There’s probably no God.”

“We now produce a certificate on parchment and we have sold 1,500 units at three pounds a pop,” said NSS president Terry Sanderson, 58.

John Hunt, a 58-year-old from London and one of the first to try to be “de-baptised,” held that he was too young to make any decision when he was christened at five months old.

At the moment, they Church of England’s Religious Intelligence website is running the following poll:

As 1,500 people pay to get ‘debaptism certificates’ from the National Secular Society in the UK, is it time the Anglican Church followed Rome and offered a service for those who wish to annul their baptism?

Your options are simple enough: 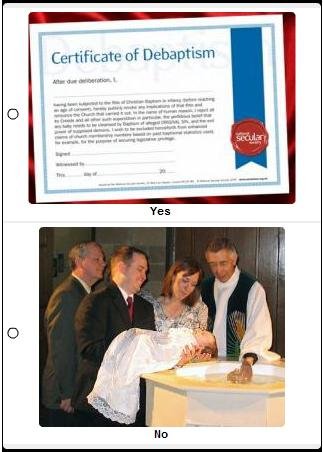 As I write this, the poll has already swung in the right direction (Yes = 92.9% of the votes) but you can cast your vote into the ring.

Obviously, every religion should allow for an easy opt-out. True believers won’t take them up on it, so it shouldn’t be a problem… But most religions won’t allow for this to happen because I imagine they know they would lose membership like crazy.

You can get your own “official” Certificate of Debaptism from the National Secular Society or watch an amusing unofficial Debaptism ceremony in action.

(via Sachiko Space and The Freethinker)