If you heard the following, you’d likely find it sexist, misogynistic, and misguided.

When Martha Peace says it, though, she’s a hero to thousands of fundamentalist Christian women everywhere:

… [P]riorities [for Christian women] may include rising early to feed the family, being available anytime to satisfy a husband’s desires (barring a few “ungodly” or “homosexual” acts), seeking his approval regarding work, appearance, and leisure, and accepting that he has the “burden” of final say in arguments. After a wife has respectfully appealed her spouse’s decision — a privilege she should not abuse — she must accept his final answer as “God’s will for her at that time”… The godly wife must also suppress selfish desires (for romance, a career, an equitable marriage), practice addressing her spouse in soothing tones, and maintain a private log of bitter thoughts to guide her repentance. “If you disobey your husband,” Peace admonishes in The Excellent Wife, “you are indirectly shaking your fist at God.”

Peace is one of the women profiled in Kathryn Joyce‘s new book Quiverfull: Inside the Christian Patriarchy Movement. 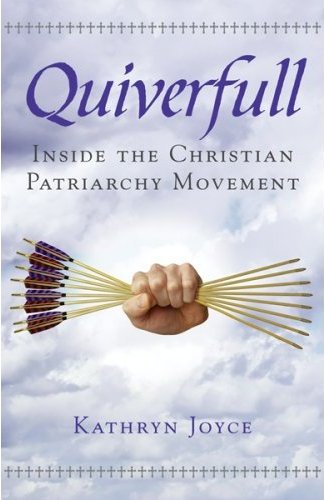 “Quiverfull” refers to the notion that women should “receive children eagerly as blessings from God, eschewing all forms of birth control, including natural family planning and sterilization.”

Essentially, a Quiverfull woman breeds and keeps breeding, knocking out babies until her uterus gives out or menopause kicks in.

This leads to families with 6 or 10 or 14 or more children (in my mind, every batch of seven children is referred to as a “Duggar of kids“)… and if this trend continues… well, you can anticipate the problems.

You submitted questions about the Quiverfull movement and Kathryn’s thoughtful and detailed (and all-too-disturbing) responses are below:

What kind of education do Quiverfull children receive? Do a significant percentage of them go to college? Do females get the same opportunities for education as males?

Almost all Quiverfull children are homeschooled, and while there’s no single curriculum to point to, a number of leaders within the movement have advocated tailoring boys’ and girls’ education to the future roles they will hold. In the case of daughters, homeschooling leader R.C. Sproul, Jr., a prominent face in Quiverfull circles, argues that their education should prepare them to be mothers and stay-at-home wives.

In a particularly disturbing anecdote, he recounts the story of a 9-year old daughter of an acquaintance who couldn’t yet read, but was a very responsible and maternal older sister to her younger siblings: a situation that confirmed his view of the daughter as an “overachiever” well on her way to being a successful helpmeet and mother herself one day.

As for college, it varies a bit. Many sons are allowed to attend, particularly if they’re taking distance courses. This path is open for some daughters, but Quiverfull leaders strongly argue against allowing daughters to attend college away from home, as the encounter with worldly outsiders could damage or destroy their faith. Instead, they suggest that daughters stay at home after they graduate from homeschool, and practice being a helpmeet to their father as they will one day help and serve their husbands.

How many Quiverfull children marry and start their own families before the age of 25? Is this a movement that passes on from generation to generation?

It’s hard to give real numbers for the movement, and particularly for where the younger generation is now. As Quiverfull began in earnest in the mid-80s, it’s only in the past few years that there has been a real wave of second generation Quiverfull children marrying and having children. The movement, which has a vibrant internet presence, makes a lot of these developments, celebrating the marriages and new children of young believers. The older generation also stresses the dire importance of passing on their beliefs to the next generation, and to this end are focusing massive attention on outreach to daughters as young as five, inculcating a sense of their destiny in embracing the Quiverfull lifestyle. And they certainly also encourage women and men to marry early. While a number of children will leave the movement when they come of age, the lifestyle is structured to make that difficult, often keeping children sheltered from too much outside influence that could turn them away from the conviction.

Do female children in these families have much freedom regarding who they marry? Regarding anything, really?

A qualified yes. When children of the movement marry, it’s not through arranged marriages, but it is often through a courtship process that has an unusual amount of paternal involvement. Courtship is promoted through homeschooling and conservative religious circles as a chaste alternative to dating, which with or without sex is disparaged as the casual “trying on” of different partners. Courtship, alternately, is explicitly marriage-minded, and only occurs after a young man proves himself to a woman’s father. Quite literally, the male suitor is actually courting the daughter’s father, long before she is supposed to know that someone is interested in her. This is discussed as a way to protect vulnerable girls’ hearts from becoming emotionally invested before there’s the safety of commitment.

However, as advocates explicitly acknowledge, it’s also the best way of making sure that the daughter marries a man suitably in tune with the father’s ideology. For men concerned with keeping the movement going in the next generation, it’s important to make sure they marry their daughter to a man who will be similarly faithful to patriarchy and Quiverfull convictions.

Are any of the members of this movement actually adopting, or are they simply reproducing?

Yes, there is a good deal of adoption among Quiverfull families as well as in the broader conservative Christian community. Adoption usually supplements a biological family though, rather than replace the necessity of a woman leaving her fertility in God’s hands, so they may have six biological children and then adopt four more.

You mentioned in your Salon article that the Quiverfull movement “… likely numbers in the tens of thousands but… is growing exponentially.” Are there numbers/studies to back that up?

No. I don’t know of any real research on the Quiverfull movement yet. Hopefully there will be more in the future. My estimate is based on speaking with dozens of movement leaders, looking at the membership numbers for online communities, and considering that the conviction of having as many children as God gives you is considerably broader than the people who claim the Quiverfull name or participate in its forums.

What toll do all these births have on the mother — Emotionally and physically? You mentioned in your article one mother suffered a partial uterine rupture. Has it ever been worse?

Emotionally and physically, many women — particularly those who have left the movement — say the lifestyle is one of relentless work and exhaustion. Quiverfull mothers perform a staggering amount of labor in terms of pregnancy and childbearing, childcare, homeschooling, cooking and cleaning and being a submissive wife. There does seem to be a high incidence of reproductive problems among some mothers, though of course this could be due to the fact that the mothers are having far more children, and far later into life, than many other women.

Nonetheless, many women have spoken of extremely difficult pregnancies — a number of whom are put on strict bed rest — and labors. Additionally, there is often a focus on natural and even unassisted home births among Quiverfull moms. This isn’t a requirement of the Quiverfull conviction, but like many related facets of the movement (such as home churching or other, agrarian-minded efforts towards family self-sufficiency), it’s an idea many women are exposed to through movement literature. In a very extreme case in Australia, a Quiverfull mother died following the teachings of one fringe home-birth advocate. Though that seems to have been an anomalous case, home births, and continuing conceptions despite poor health do make for some serious health risks for some mothers.

What can we do for women who want to leave this movement? How can we ensure that the daughters and sons of these women and men get assistance out?

That’s a hard question. There are not many vocal exited women, though Cheryl Lindsey Seelhoff and Vyckie Garrison are notable exceptions. Exited women face substantial difficulties as single mothers to large families, often including a number of young children, often limited financial resources, and a lack of outside work experience. Additionally, they’re often without references from a community that they left and which will often shun them. Understanding and respect — particularly that they came to their convictions not through ignorance but through devout belief — would likely be a relief to these moms. For both mothers and children, there are serious and very substantial psychological, emotional, spiritual and financial barriers to leaving the movement. Still, Quiverfull is not a cult, but a conviction that many women do choose willingly — however constrained their choices later become.

Are these people (women and children) on some sort of public assistance? If so, what’s being done about it?

Generally speaking no, they’re not. Most Quiverfull believers tend to have very strong beliefs about living debt-free and not accepting government assistance. They believe that churches are the proper custodians of public charity and welfare. However, if they did need public assistance, helping families feed and clothe their children is what public assistance programs are in place to do, so I don’t believe anything would need to be done about the proper functioning of a social safety net.

Are there allies within the religious congregations that perceive this movement as a threat? Or at least a bad idea?

There is abundant and lively opposition to patriarchy and Quiverfull ideologies within more liberal and moderate churches. Much of the momentum of Quiverfull began — like fundamentalism itself — as a backlash against liberalized theology in Protestant denominations. In this case, it was a reaction against the influence of feminism in Christian churches. Though Quiverfull is at the vanguard of a much broader resurgence of complementarianism, or “biblical” gender roles, across conservative denominations, there are many other mainstream and liberal denominations that are passionate advocates for women’s and reproductive rights.

What happens if it turns out that either one of the couple is infertile? If they are willing to accept 17 kids as “God’s plan” are they willing to accept zero, or do they go in for medical intervention? And what is their standing in the community if they can’t have kids?

The philosophy of Quiverfull, of leaving fertility in God’s hands, is ideally supposed to mean that parents accept whatever God gives them: 17 children or none. And I have met a few infertile women who still called themselves Quiverfull — though they spoke of feeling stung by some in the movement who focused predominantly on the number of children one has as a measure of spirituality.

Also, in some of the literature of the movement, Quiverfull mothers who had borne large families spoke of their sadness and loss of identity when they began menopause and began to lose their fertility. One even described herself as feeling dried out and withered when her childbearing years ended. This, significantly, is the same language that is used to describe the side-effects of using birth control, or even women who don’t have children. For me, it was a powerful illustration of what a no-win situation this ideology can be, even for women who followed the conviction diligently their entire reproductive lives.

March 25, 2009 I Did Not Know This About Easter Eggs...
Browse Our Archives
What Are Your Thoughts?leave a comment