Retired barber Joe Godlewski says that when television chefs recommended kosher salt in recipes, he wondered, “What the heck’s the matter with Christian salt?”

By next week, his trademarked Blessed Christians Salt will be available from seasonings manufacturer Ingredients Corporation of America. It’s sea salt that’s been blessed by an Episcopal priest.

Well, there’s no need for atheists to feel left out.

We now have our own version: 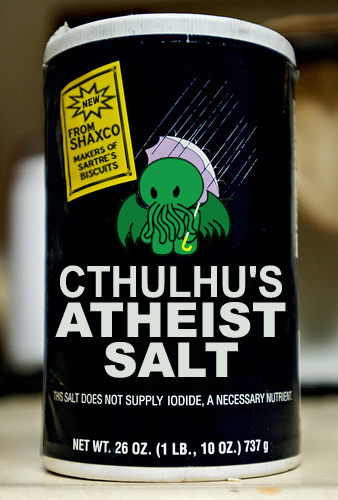 It’s just like regular salt, but without any of that “blessed by an Episcopal priest” nonsense. And I assure you no rabbis came anywhere near this stuff either. It’s yummy, it’s tasty and it won’t burn your tongue simply for being a nonbeliever. Coming soon to a health foods store near you!

It’s just what we need when we eat our children.

March 25, 2009 Ray Comfort Has No Luck With Other Fruits...
Browse Our Archives
What Are Your Thoughts?leave a comment