There’s a stack of books on my desk waiting to be read and reviewed. And I put them all aside because Neil deGrasse Tyson‘s new book The Pluto Files came in the mail and I couldn’t wait to read it. 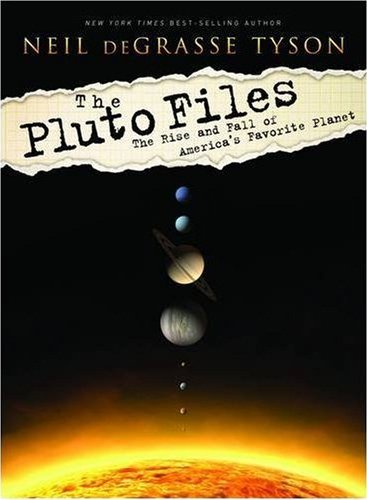 I love Tyson for the same reason I enjoy reading Phil Plait‘s blog: because I know next to nothing about astronomy, and they know plenty, and they make me want to learn more.

This book is no exception… at least for a couple chapters.

The parts where Tyson explains the history of Pluto and how the planet operates in our solar system are fantastic. (*So* much better than Wikipedia.)

It’s also fun to read about people who are in the middle of a media maelstrom and come out better on the other side. Tyson explains his role in getting Pluto demoted from its ninth-planet-hood (he wasn’t the only person who didn’t think Pluto fit the mold of other planets though he seems to have received the brunt of the hatemail) and it’s exciting because you know that, ultimately, he’s on the winning side of the issue.

The only criticism I have: In an effort to fill out the book, I guess, Tyson included every reference he could find of people commenting on the Is-Pluto-a-Planet? issue — songwriters, satirists, comedians, reporters, people who sent him emails — in the heart of the book. If those bits were compiled in an appendix, fine, but they form a bulk of many chapters. And each one receives an (unecessary) explanation from the author. I get it. It’s funny. I don’t need to be told why. In fact, I would feel smarter if I understood the jokes without any commentary.

I get that some of the material needs to be dumbed down, but not that much…

That’s the only downside. The rest of the book is fascinating — and Tyson explains the science behind the former planet in an easy-to-understand way. I finished the book in just a few short sittings over a couple days.

I would buy just about any book Tyson writes because he’s so good at what he does when it comes to increasing the public understanding of science. I enjoyed this one, and I’ll be even more excited when he comes out with another full-length book — something more like Death By Black Hole. In the meantime, though, The Pluto Files has opened a few doors of curiosity for me and I want to find out more about the subject. How many other books can make that claim?