Seattle Atheists is preparing to launch a bus ad campaign of its own, humorously enough, on April 1st, a.k.a. April Fool’s Day, a.k.a. the Atheist’s Holiday (ha ha ha)…

Here’s what you will be seeing on local buses: 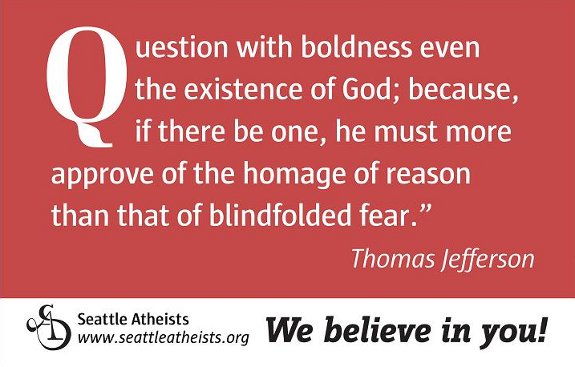 I like it. Short and sweet and pro-atheist instead of anti-religious.

And leading into that campaign will be a regional conference — called Darwin @ 200 (and other matters) — held at Portland State University, sponsored by the Northwest Freethought Alliance and the Humanists of Greater Portland. The conference will be held March 27th-29th. It’s not too late to sign up!

(Thanks to Amanda for the links!)

March 5, 2009
Things I Found Out at the Anti-Gay Workshop
Next Post