Released today is a new book atheists may enjoy. It’s called Good Book: The Bizarre, Hilarious, Disturbing, Marvelous, and Inspiring Things I Learned When I Read Every Single Word of the Bible by David Plotz. 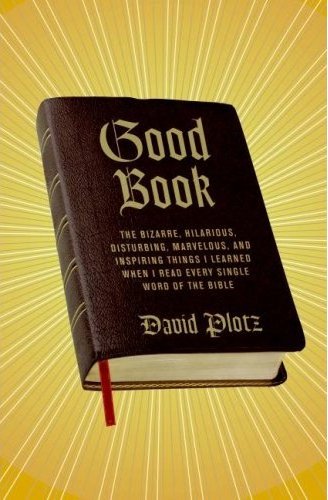 A couple years ago, Slate columnist Plotz blogged the Bible — reading it front-to-back and writing about his findings.

He’s not advocating that you believe what it says; rather, he asks that you read it (the Bible) for the sake of cultural and theological literacy:

While reading the Bible, I often felt as if I had finally lifted a veil from my eyes. I learned that I hadn’t known the true nature of God’s conflict with Job, which is the ur-text of all subsequent discussions of obedience and faith. I realized I was ignorant of the story of Ruth. I was unaware of the radical theology of Ecclesiastes, the source of so many of our ideas about the good life. I didn’t know who Jezebel was, or why we loathe her, or why she is the painted lady, or even that she was married to Ahab.

Not to sound like a theocratic crank, but I’m actually shocked that students aren’t compelled to read huge chunks of the Bible in high school and college, the way they must read Shakespeare or the Constitution or Mark Twain.

Did reading the Bible change his views at all?

Not surprisingly, he’s no closer to becoming a Christian. If anything, he’s further away from it. In fact, he’s discovered what Richard Dawkins and so many others have written about time and time again:

After reading about the genocides, the plagues, the murders, the mass enslavements, the ruthless vengeance for minor sins (or none at all), and all that smiting — every bit of it directly performed, authorized, or approved by God — I can only conclude that the God of the Hebrew Bible, if He existed, was awful, cruel, and capricious. He gives us moments of beauty — such sublime beauty and grace! — but taken as a whole, He is no God I want to obey and no God I can love.

I’m not sure if Plotz’s book provides any new insights that you wouldn’t have found by reading through the Bible yourself. But for those who haven’t read it and might not have the desire to, this sounds like a pretty decent filter.

(Thanks to James for the link!)

March 3, 2009
They Know Why Atheists Reject Christianity
Next Post