Glenn Beck Calls for Americans to Unite. Not So Fast, Atheists…

Glenn Beck of FOXNews wants to fix America and he needs your help. He wants all Americans to join together to watch his show next week, when he will explain how to take back the country: 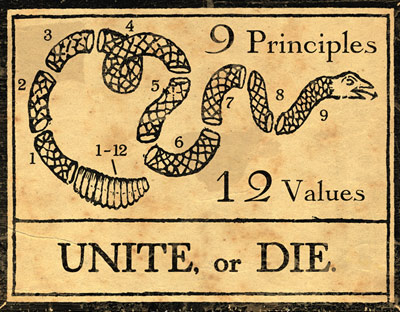 So, how do we show America what’s really behind the curtain? Below are nine simple principles. If you believe in at least seven of them, then we have something in common.

One’s already out of the question for most of us:

2. I believe in God and He is the Center of my Life.

So I’m already partly un-American to Beck. (Brother Richard‘s picture says it a bit more succinctly.) I don’t really mind the other 8 Principles though the use of the word “sacred” in number 4 is disturbing.

It doesn’t help that the “values” of Reverence and Humility are probably not applicable to atheists either, given Beck’s definitions of those words.

In any case, Beck wants to collect pictures of “real” Americans to display unity.

Beck wants us to send a digital version of your picture to: wesurroundthem@foxnews.com to show our support.

Please join me in emailing Beck and letting him know that his continued bigotry will not be tolerated. Also, feel free to send him a picture of you with something added to make it clear you are an nontheist.

Will those pics change his mind? Of course not. But it’s never a bad thing to remind people that atheists are just as American as Christians.