Ray Comfort doesn’t need to ask for a debate with Richard Dawkins anymore.

The debate is already over. Comfort and banana-pal Kirk Cameron have lost.

The Creationism proponents used to say that if evolution were true, we should expect to see a crocoduck (a crocodile/duck transitional form) in the fossil records: 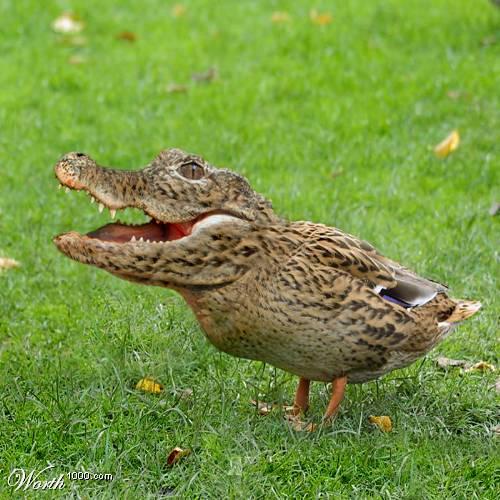 They said we haven’t seen that hybrid, thus evolution is untrue.

Now comes news of a new fossil that was found…

The unusually intact fossilized skull of a giant, bony-toothed seabird that lived up to 10 million years ago was found on Peru’s arid southern coast, researchers said Friday.

The museum said in a statement that the birds had wingspans of up to 20 feet (6 meters) and may have used the toothlike projections on their beaks to prey on slippery fish and squid. But studying members of the Pelagornithidae family has been difficult because their extremely thin bones — while helpful for keeping the avian giants aloft — tended not to survive as fossils.

With fossils discovered in North America, North Africa and even Antarctica, Kepska said, the birds were ubiquitous only a few million years before humans evolved and scientists puzzle over why they died out. Some believe they are related to gannets and pelicans, while other say they are related to ducks.

It’s not exactly what Comfort had in mind, but close enough, dammit. It had toothlike projections, it flew… what else do you need.

It also means the scientific name for a crocoduck is pelagornithid. 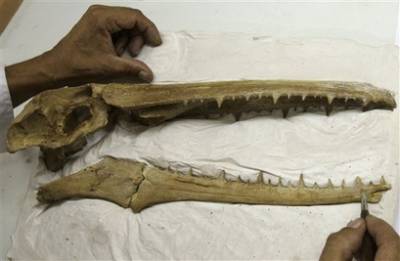 (Photo for AP by Martin Mejia)

That thing is freaky.

But if it pwns Comfort and Cameron, I’ll deal with it.

(Thanks to everyone who sent in the link!)

February 28, 2009
James Dobson Has Retired: The Best Lines?
Next Post