There’s a new book about atheism out in bookstores today that’s quite different from the New Atheist ones already in print: Losing My Religion: How I Lost My Faith Reporting on Religion in America — and Found Unexpected Peace 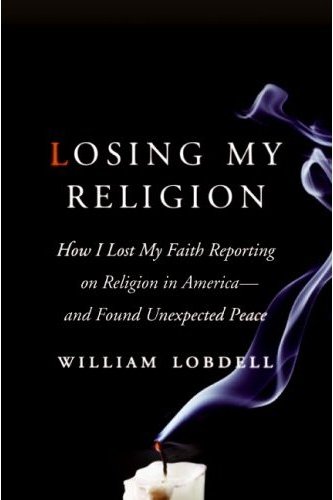 This one, by William Lobdell, tells the story of how he came out from under the spell of religion. He is a former religion writer for the Los Angeles Times, former evangelical, and (later) a former Catholic.

One excerpt from the book:

Though I continued to work other religion stories, my editors wanted my primary focus to be the Catholic sex scandal. I began to live a dual life. By day, I investigated the local dioceses, dug up documents in courthouses, talked with a seemingly endless string of victims, and interviewed bishops, their aides, attorneys and priests. In my off-hours, I put in my final months of training to become a Catholic.

He’s not out to (de-)convert you, just to tell you how he became an atheist himself. In that sense, this is a book that religious people can read from front to back without wanting to burn it. (Which I suspect will make it less popular among die-hard atheists, unfortunately.)

If you’re someone who only recently became an atheist, or someone who’s only thinking about it, this is a book that could help you along the way. If you’re religious, it can help you understand why some atheists choose the path that we do.

Check it out and support a fellow atheist author.

He also has a fantastic blog if you haven’t checked it out yet.