If I ask you to think of a Religious Right organization, which groups come to mind?

Another group called Exodus Mandate puts them to shame. EM says those other groups are not religious-right enough. They want every Christian to home-school their children and trash public schooling.

Nine organizations were rated, many of which have actively engaged in the cultural war in the US for the past several decades. [Chaplain E. Ray] Moore said, “Even though these organizations have been valiantly fighting the culture war, they have suffered terrible defeats. They have not been able to arrest and reverse the moral and cultural slide by protests, lobbying, voting and legislative remedies. It’s time for these ministries to revisit their methodology and ask themselves if there is a biblical model for spiritual and cultural renewal.”

They even made a chart grading all the groups (PDF): 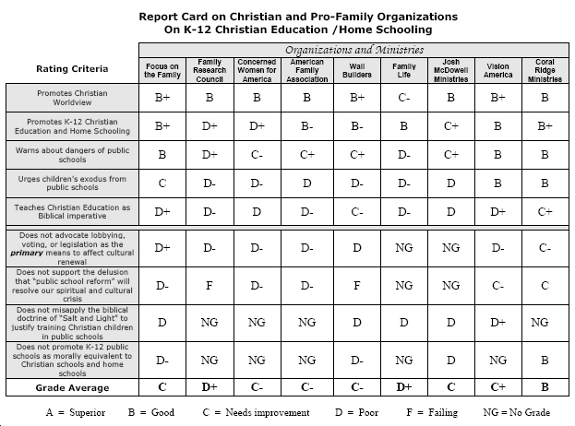 The report card takes a while to comprehend and I’m still not sure I get it. “Does not misapply the biblical doctrine…?” That’s clear… and no grade given in some areas? Really? Just couldn’t find that information…?

It’s a bit unnerving that FotF only gets a C grade. As one commenter here says:

Either they gotta start grading on a curve or everyone is doomed to “Remedial Bigotry” classes come June!

February 17, 2009
Friendly Atheist Contest #40: How Obama Will Reach Out to Atheists
Next Post