The first Richard Dawkins book I ever read was The Ancestor’s Tale. (It’s still my favorite by far.)

I think I became his fan within the first couple pages.

That’s because Dawkins referenced this iconic picture of “evolution in action”:

Dawkins wrote about a major flaw with the image. It showed:

… man as evolution’s last word (and in this context it always is man rather than woman); man as what the whole enterprise is pointing towards; man as a magnet, drawing evolution from the past towards his eminence.

Still, the image has persisted and it has seen many imitators.

Listicles informs us of 10 other Illustrated Versions of Evolution.

Like this one, the evolution of the white collar man: 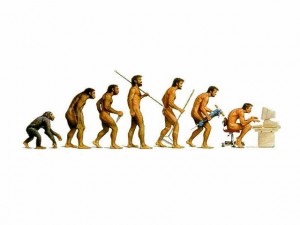 Sadly, they left my favorite picture off the list:

(via Listicles — Thanks to Joe for the link!)

February 12, 2009 How Can Charles Darwin Hurt His Self Image?
Browse Our Archives
What Are Your Thoughts?leave a comment