Do We Have an Atheist Senator?! January 30, 2009 Guest Contributor

Do We Have an Atheist Senator?!

A couple months ago, I wrote about how, if atheists couldn’t get elected to public office, perhaps they could be appointed.

It seems that may have already happened. 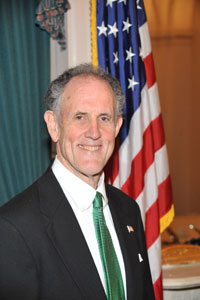 The New York Times hints at his potentially non-religious viewpoint:

In a Senate dominated by lawyers and career public servants, Mr. Kaufman, who holds an undergraduate degree from Duke and an M.B.A. from the Wharton School, is one of only two engineers. (The other is Jack Reed, Democrat of Rhode Island.)

What he calls his “humanistic” way of thinking he attributes largely to his Irish Catholic mother, a teacher, and his father, a secular Jew, a social worker and his hero.

See, “humanist” is a code-word. Like “lifelong bachelor.” “Secular Jew” is not code, that really just means straight-up atheist. But still! Ted himself can’t admit to it straight up!

As far as I can find, the 69-year-old Kaufman has never publicly said he doesn’t believe in God. Until he does so, his status as a closeted “Humanist” doesn’t do anything for us.

Even if he were to come out as a non-theist — and I hope he does — he says that he will remain in the Senate only for two years, at which point he will step aside and let a special election decide who will finish up the final four years of Biden’s current term.

We have one non-theist in the House — Pete Stark (D-CA). It would be nice to have one in the Senate, too… Stark is the only Congressperson in my lifetime who has been elected even when voters knew he was an atheist.

We have to poke many more holes in that glass ceiling before it breaks.

If, indeed, Kaufman doesn’t believe in God, he would be doing the millions of Americans who agree with him a huge favor by saying as much during the short time he’ll be a Senator.