In tomorrow’s special Inauguration editions of The Washington Post, the American Humanist Association will be running the following full-page ad: 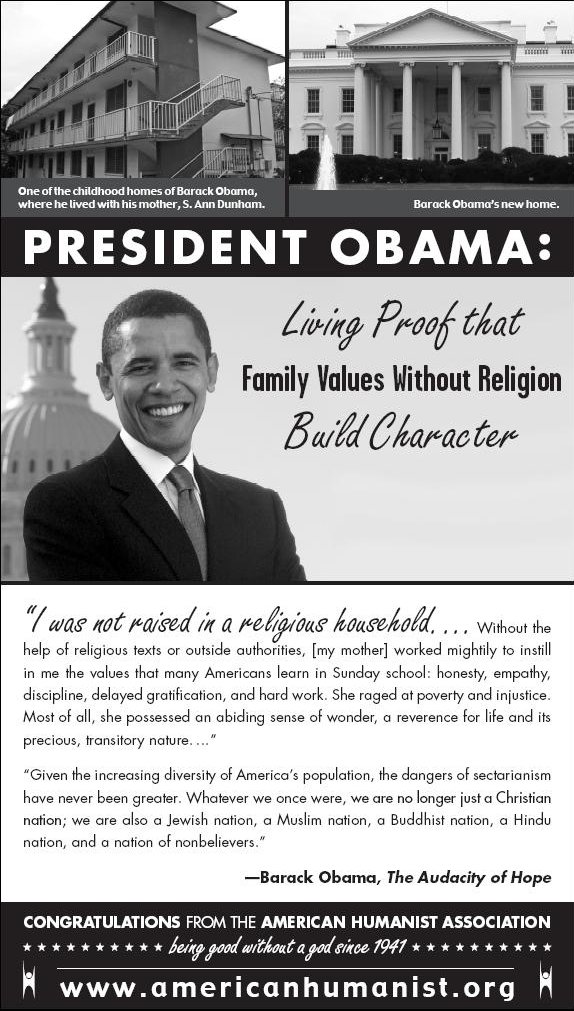 The ad uses Barack Obama’s own words about his Humanist mother to show that you can indeed raise excellent, moral, hard-working children without resorting to religion.

“We hear so much these days about how traditional religious family values are necessary for raising moral children who can grow into accomplished adults,” said American Humanist Association Executive Director Roy Speckhardt, father of two. “But we humanists have known for a long, long time that ethical humanist values build character. The number of moral and accomplished humanists is legion. We’ve been honoring the greatest of them every year since 1953 at our annual conferences. Now Barack Obama has given us the opportunity to share this truth with those from around the country who come to our nation’s capital to share in the inauguration experience.”

While not asking for donations, the ad may end up paying for itself.

Here’s hoping that people who need to see the ad do see it.

Even better, read the Post tomorrow while sitting on an Atheist Bus. Double whammy!

Don’t forget the Freedom From Religion Foundation will also have a quarter-page ad in the same newspaper.